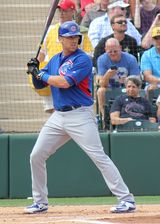 Third baseman Mike Olt was picked in the supplemental first round in the 2010 amateur draft and made his major league debut two years later.

The Texas Rangers took him 49th overall in the 2010 amateur draft. The choice was compensation for the loss of Marlon Byrd to free agency. He was Texas's fourth draftee that year, following Jake Skole, Kellin Deglan and Luke Jackson. The scout was Jay Heafner. He quickly signed and joined the Spokane Indians, going 0-for-4 in his pro debut against the Vancouver Canadians on June 21st. he played 69 games for Spokane, hitting .293/.390/.464 with 16 doubles and 9 homers. He slumped to 3 for 17 in the playoffs. He led Northwest League third basemen with a .942 fielding percentage, 37 putouts, 124 assists and 12 double plays and was among the NWL leaders as well in runs (57, second to Kevin Mailloux), RBI (43, tied for 5th with Zach Walters), doubles (tied for 6th), home runs (7th), OBP (7th), OPS (7th) and slugging (8th). He was not named to the NWL All-Star team as Mailloux was picked at third base. Baseball America rated him as the league's 4th-best prospect after Jurickson Profar, Michael Choice and Jedd Gyorko.

He was injured in a home plate collision in June of 2011, suffering a broken collarbone, and missed two months of the season. As a result, he played in only 69 games with the Myrtle Beach Pelicans of the Class A Carolina League, in addition to a 4-game rehabilitation assignment with the AZL Rangers. At Myrtle Beach, his batting line was .267/.387/.504, with 15 doubles and 14 homers; it was enough to be named a post-season All-Star and for Baseball America to list him as the third-best prospect in the circuit (behind Manny Machado and Drew Pomeranz). They also rated as the best defensive third baseman in the loop.

In 2012, Olt started the season at AA with the Frisco RoughRiders of the Texas League, where he hit .287/.398/.579 with 28 homers and 82 RBI in 95 games. At that point, he was leading the TL in dingers, was second to Nathan Freiman in RBI and was leading in OPS. He played in the 2012 Futures Game and was named a mid-season TL All-Star. In the 2012 Futures Game, he hit cleanup and started at third base. He struck out against Jose Fernandez in the 2nd, grounded out versus Chris Reed in the 3rd and flew out facing Enny Romero in the 5th. In the 6th, he doubled off Ariel Pena to score Scooter Gennett and then scored on a single by Jonathan Singleton. In his last at-bat, he grounded out against Julio Rodriguez. He moved from 3B to 1B when Arenado entered at third, Singleton moved from 1B to LF and LF Choice left the game.

He was called up to Texas on August 2nd, with the Rangers in the middle of a pennant race, and was immediately inserted into the starting line-up, playing first base and batting 8th in a game against the Rangers' closest rivals, the Los Angeles Angels of Anaheim. He singled off C.J. Wilson in his first at-bat and came around on a hit by Ian Kinsler. He went 1 for 3 and scored a run before giving way to pinch-hitter Mitch Moreland in the 7th, and Texas won the game, 15-9, with a late surge. With Adrian Beltre entrenched at third base, he did not figure to see much action at the hot corner for the Rangers, at least in the immediate. On August 11th, he gave the Rangers a walk-off, 2-1, victory with a clutch single off Brayan Villarreal of the Detroit Tigers with two outs in the bottom of the 9th. In the end, he hit only .152 for Texas (5 for 33) with 5 RBIs.

There was no room for him on the team in 2013, and he returned to the minor leagues, playing at AAA with the Round Rock Express of the Pacific Coast League. However, he failed to meet expectations, hitting only .213 in 65 games as the team's starting third baseman. He did show good power, though, with 15 doubles and 11 homers. On July 22nd, he was traded to the Chicago Cubs, along with Justin Grimm and C.J. Edwards, in return for veteran starter Matt Garza. He then played 39 games with the Iowa Cubs, hitting only .168 with 3 homers and 8 RBI and did not play at all in the big leagues that year. He made the Cubs' roster out of spring training in 2014 though and hit his first big league homer off Wandy Rodriguez of the Pittsburgh Pirates on April 3rd. he ended up with 12 homers that season, although the rest of his statistics weren't so good: a .160 average and 100 strikeouts in 89 games. he eventually lost the starting job to Luis Valbuena. With Cubs farmhand 3B Kris Bryant being named the Minor League Player of the Year that season, it looked like Olt's days with Chicago were numbered, but it was Valbuena who was traded after the season, and Olt managed to win the starting job at the hot corner at the start of the season in 2015, in part because the team wanted to delay Bryant's major league debut for cost reasons. Olt went 2 for 12 in 4 games, when he was hit by a pitch on the right wrist by Adam Ottavino of the Colorado Rockies on April 11th. he played a couple more games after that, but x-rays revealed a hairline fracture that put him on the disabled list on April 16th, coincidentally on exactly the date on which the Cubs no longer had to worry about Bryant become eligible for salary arbitration a year early. He thus faced three weeks on the sidelines, and a likely very tough fight to get his old job back on his return.