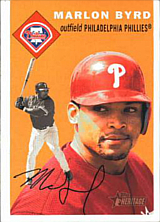 "He's always been a character guy and one of the hardest-working guys I've seen... he plays the game like Pete Rose." - Dickie Noles 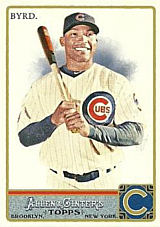 Marlon Byrd played fifteen seasons in the majors. A 2010 National League All-Star, he may be better known for serving two suspensions for PEDs.

Drafted in the 10th round of the 1999 amateur draft out of Georgia Perimeter Junior College by the Philadelphia Phillies, Marlon began his minor league career with the 1999 Batavia Muckdogs of the New York-Penn League, hitting .296/~.369/.535 and leading the team in homers (13) and RBI (50). Third in the league in home runs, he was named to the All-Star team at DH. In 2000, Marlon played for the Piedmont Boll Weevils and posted a .309/.375/.515 line. Strong across the board, he scored 104 runs, rapped 13 triples, cracked 17 homers, drove in 93 and stole 41 bases in 46 tries. He led the South Atlantic League in triples, extra-base hits (59) and total bases (265), was sixth in average and made the league's All-Star team in the outfield. Selected by Baseball America as Philadelphia's 10th-best prospect entering 2001, Byrd almost joined Jeromy Burnitz as the second 30-30 man in Eastern League history. Named MVP for his work for the Reading Phillies, he led the loop's outfielders in fielding percentage (.994) and hit .316/.386/.555. He stole 32 bases in 37 attempts, scored 108 runs and homered 28 times. BA ranked him, after the year, as the second-best EL prospect (after Josh Beckett), the top Philadelphia prospect and the second-best outfield prospect in all of baseball (after Joe Borchard).

Making his fourth All-Star team in four seasons, Byrd was an All-Star outfielder in the 2002 International League after leading the circuit in runs scored (103), total bases (256) and extra-base hits (59). Hitting .297/.362/.476, Byrd stole 15 bases in 16 attempts and knocked 37 doubles (two behind league leader Chase Utley) and 15 homers. Byrd reached the majors as a September call up in 2002, playing 8 games in center field and 2 in right field. When Byrd debuted as the starting center fielder for the Phillies on September 8, 2002, the second baseman was Marlon Anderson, the only other "Marlon" in the history of MLB. Before Byrd's first day began, his manager, Larry Bowa, had already been ejected. Byrd struggled in those 10 games (.229/.250/.371) and, after the season, weighed an astonishing 235 pounds. [1] Losing 15 pounds in the offseason, he became the Phillies' starting center fielder for the 2003 season, supplanting Doug Glanville. Though Byrd posted quality numbers (.303/.366/.418) with solid defense, they were a far cry from his minor league numbers in terms of power though certainly otherwise within expectations. In 2004, he was the center fielder for 9 games, batting only .228/.287/.321 with just 5 home runs and 2 stolen bases. He spent a significant amount of time back with the AAA Scranton/Wilkes-Barre Red Barons, where he showed slight improvement, with a .263/.323/.388 line, caught 3 times in 5 steal attempts.

Byrd came back energized for 2005, determined to win a roster spot and the center fielder's job. The Phillies did not expect such a turnaround, signing All-Star Kenny Lofton in the offseason to patrol the oddly-angled center field at Citizens Bank Park. In spring training, Byrd posted monster numbers (.390/.419/.537). The Phillies had a hard time keeping him off the roster, but he was sent to AAA. Ten games into the season, split between the majors and minors, Byrd was traded for also once-promising center fielder Endy Chavez of the Washington Nationals. Chavez played sparingly the rest of the season, while Byrd played 74 games with the Nats, splitting time wit a strong stint with the AAA New Orleans Zephyrs. Overall, he hit .266/.323/.376 in the majors that year, .407/.476/.667 for New Orleans in 21 games and .368/.368/.895 in five games for Scranton/Wilkes-Barre. For the 2006 season, Byrd played well in spring training (.267/.380/.433) but once again posted disappointing numbers in the majors, ending the year with a .223 average in 78 games.

Marlon made a solid comeback for the Texas Rangers in 2007. Taking advantage of opportunities left by the departure of outfielders Gary Matthews and Carlos Lee via free agency, he secured a job as the team's fourth outfielder and hit a solid .307 with 17 doubles, 8 triples and 10 homers in 114 games (for a career-high 110 OPS+) while seeing playing time at all three outfield spots. He continued to hit well in 2008, putting up a batting line of .298/.380/.462 in 122 games, again as the fourth outfielder. He took another step forward in 2009, setting career highs for doubles (43) and homers (20) as he slugged .479 in 146 games. That year, he found a more regular position, playing 103 games in center field.

Byrd signed with the Chicago Cubs for 2010. He was the team's best player and earned a first trip to the All-Star Game. He hit .293/.346/.429 in a career-high 152 games playing exclusively in center field for the Cubbies. He was off to another strong season in 2011 when he was beaned by Alfredo Aceves of the Boston Red Sox on May 21st; the ball struck him just below the flap on his batting helmet and he suffered multiple facial fractures as a result. He was batting .308 in 44 games at the time, coming back to play 119 games overall with a batting line of .276/.324/.395. He hit okay immediately after coming back in July, batting .233 in 25 games during the month, but faded down the stretch hitting .221 from August 1st forward.

In 2012, Byrd started the season very slowly for the Cubs, only going 3 for 43 (.070) in his first 13 games. On April 21st, he was traded to the Boston Red Sox in return for pitcher Michael Bowden and a player to be named later. He was moving to a difficult situation, with the Sox playing poorly and missing two of their starting outfielders, Jacoby Ellsbury and Carl Crawford, both injured. Byrd's stay lasted less than two months, as he was designated for assignment on June 9th, when the team activated Daisuke Matsuzaka from the disabled list. He hit .270 with one homer and 7 RBI in 34 games. With Scott Podsednik and Daniel Nava playing well, the Sox decided to keep Donzell McDonald instead of Marlon to be their fourth outfielder. Still unemployed on June 25th, he received the news that he was being suspended for 50 games for violating MLB policy on PEDs. He tested positive for Tamoxifen, a banned substance often taken to combat some of the side effects of steroids use. Byrd argued that he had taken the substance for an unnamed "personal medical condition" (the substance's legal use is related to combating breast cancer), but one factor working against him was his former association with the infamous Victor Conte, a central figure in the BALCO scandal. He was the second major leaguer to be suspended that season, following Freddy Galvis of the Phillies.

On February 1, 2013, Byrd signed a minor league contract with the New York Mets. He won the team's regular right field job with a strong performance in spring training and, on Opening Day April 1st, had two hits and as many RBI as the Mets defeated the San Diego Padres, 11-2. He played 117 games for the Mets, hitting a solid .285 with 21 homers and 71 RBI. With the Mets headed nowhere, he was traded to the Pittsburgh Pirates (alongside catcher John Buck) on August 27th in exchange for prospect Dilson Herrera and a player to be named later (Vic Black). In his first game for the Bucs, he hit a three-run homer off the Milwaukee Brewers' Tom Gorzelanny on August 28th, leading the Pirates to a 7-1 win. He ended up hitting .318 in 30 games for the Pirates, for a combined batting line of .291/.336/.511 with 24 homers and 88 RBI. The homers set a new career high and the RBI were one short of his personal best. In his first postseason appearance, in his 12th big league season, he homered off Johnny Cueto of the Cincinnati Reds in his first plate appearance of the Wild Card Game on October 1st. He added a hit and a run-scoring ground out off [J.J. Hoover]] later in the game to help the Pirates win, 6-2, and advance to the Division Series. He continued to hit well, going 6-for-18 with a pair of doubles as the Bucs lost to the St. Louis Cardinals in five games. A free agent after the season, he signed a two-year, $16 million contract to re-join the Phillies on November 12th.

Byrd had another good year for the Phillies in 2014, playing 154 games as the team's starting right fielder, putting up an OPS+ of 110 thanks to a .264 average, 28 doubles, 25 homers, 71 runs scored and 85 RBI. That performance was wasted on a poor team badly in need of rebuilding. After the season, the Phillies began to trade some of their veterans, including Marlon, who was sent to the Cincinnati Reds on December 31st in return for pitcher Ben Lively. In 96 games as the Reds' starting left fielder in 2015, Marlon hit .237 with 19 homers and 42 RBI. The Reds had expected to compete but were having a difficult season, so Marlon became expendable again. On August 20th, he was sent to the San Francisco Giants in return for minor league reliever Stephen Johnson. He had a great debut for the Giants, facing the Pirates on August 21st, collecting 3 hits, including a two-run homer, in a 6-4 win. In 39 games for San Francisco, he hit .272 with 4 homers and 31 RBI to finish the season at .247 with 25 doubles, 23 homers and 73 RBI in 135 games.

On March 17, 2016, Marlon joined yet another organization, signing a one-year deal with the Cleveland Indians, who were likely to start the year without their best outfielder, Michael Brantley, still recovering from offseason shoulder surgery. On June 1st, MLB announced that he had failed a test for PEDs for the second time of his career, and as a result was handed a 162-game suspension. The positive test was for a human growth hormone and the ban was effective immediately. Marlon accepted responsibility and did not challenge the decision, telling Indian teammates the day the suspension came down that his career was over. He was hitting .270 with 5 homers and 19 RBI in 34 games at the time. Given he was a second-time offender who should have known better, his plight did not elicit much sympathy among fellow players. For example, recently retired pitcher Jeremy Guthrie called him a "joke", and that even though he personally liked Byrd, he thought that his actions were "lamentable" and detrimental to the sport.