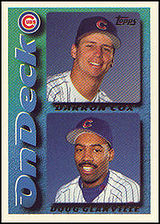 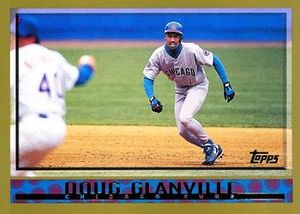 Doug Glanville is that rarest of creatures, an Ivy Leaguer who majored in engineering and was also successful in the major leagues. His senior engineering project at the Ivy League's University of Pennsylvania was a transportation-feasibility study for a proposed baseball stadium on the site of the Philadelphia post office at 30th Street.

Glanville was not usually a strong hitter but stayed nine seasons in the majors due to his ability to play center field and his talent at achieving a high percentage of stolen bases - he stole 168 while getting caught only 36 times. He was once in the top ten in batting average with a .325 BA in 1999, and he had some power with a high of 14 home runs in 2001. He led the National League in stolen base percentage in 1999. He ranked third in sacrifices among non-pitchers in 2000 with 12. He hit 7 of his 14 home runs of 2001 in the month of May. That month, he also had a .509 slugging percentage. He hit a game-winning RBI triple in extra innings to win Game 3 of the 2003 NLCS.

Doug Glanville had a short appearance, as himself, in the 2001 movie Summer Catch starring Freddie Prinz Jr.

As of the summer of 2005, he was a managing partner for a real estate company in Chicago, as well as a member of the Board of Overseers for Penn's College of Engineering. The two most similar players through 2006, according to the similarity scores method, are Vic Davalillo and Milt Thompson.

His parents were born in Trinidad.

Starting in 2008, Doug Glanville authored a number of articles reflecting on baseball for the New York Times and ESPN.com. In 2010, he published The Game From Where I Stand: A Ballplayer's Inside View.

In 2018, he taught a class on sports and social justice at his alma mater. In 2019, he was a reporter for NBC Sports Chicago.