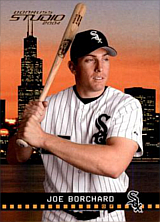 Joe Borchard played six seasons in the majors. He hit 26 home runs in 716 big league at bats to go along with 151 career minor league bombs.

Joe was a college baseball star out of Stanford. He played for the Stanford Cardinal from 1998-2000 and, in 1998, his baseball teammates included many other future major leaguers: John Gall, Jody Gerut, Eric Bruntlett, Jason Young, Jeff Austin, Chad Hutchinson, Justin Wayne, and Tony Cogan. Borchard was also a quarterback on the football team. A couple of times, he passed for over 300 yards, including once against UCLA. He participated in both the 1999 College World Series and the 2000 Rose Bowl. Upon signing with the ChiSox, he received a record $5.3 million signing bonus (later topped by Justin Upton in 2005).

Playing in the minors from 2000 to 2002, he got his first major league shot in 2002 with the White Sox. Thereafter, he was to bounce back and forth between Charlotte in Triple A and the parent White Sox each year. In the 2001 Baseball World Cup, Borchard hit .147/.326/.382 as the Team USA right fielder with 7 walks and a key homer to help the USA to a semifinals win.

While with the White Sox, he earned his most major league at-bats in 2004, when outfielder Magglio Ordonez was injured. He hit .417 in 7 games with the 2005 White Sox, but did not appear in postseason play. In 2006, he was traded to the Seattle Mariners, appearing in 6 games before moving to the Florida Marlins at midseason after being designated for assignment. With the Marlins, he appeared in 108 games, making 2006 the major league season in which he received his most appearances and at bats. While his batting average was low, he drew walks and showed some power. He was with the Fish again for most of 2007 after hitting over .280 in spring training. In early August 2007, he was sent to Triple A Albuquerque, where in his first 19 games he hit .385 and slugged .800. On August 27, he was named Pacific Coast League Player of the Week.

He was a non-roster invitee with the Atlanta Braves in 2008 spring training, hitting .317, but was sent down to Richmond on March 28. After playing a couple months, he had Tommy John surgery and was out for the rest of 2008. The Richmond team moved to Georgia in 2009 to become the Gwinnett Braves, and Borchard was one of the team's outfielders in 2009 until released. A month later, he signed with the San Francisco Giants and played for the Fresno Grizzlies in 2009 and 2010. In May 2010, both Joe and Buster Posey were hitting quite well for Fresno (each slugging around .550). Borchard became the second Grizzly to hit for the cycle on May 3, pacing the team to a 14-4 victory over the Colorado Springs Sky Sox. Posey soon went up to stay while Joe remained behind at Fresno, his final season in organized baseball. In the winter of 2010-11, he played ball in the Caribbean.

He signed in late March 2011 to play with the Bridgeport Bluefish in the independent Atlantic League. In June 2011, Joe announced his retirement. Bridgeport manager Willie Upshaw felt that Borchard still had plenty of ability and that a major league organization team would sign Joe sometime later in the season. Borchard, 32, stated that he would be interested in being a scout, and that he had sent resumes to a number of companies in his hometown of Charlotte. Source