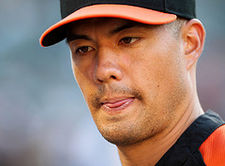 Jeremy Guthrie spent one year at Brigham Young University before going to Spain for two years on a Mormon mission. A result of his mission was that he became fluent in Spanish; he would put those language skills to good use as a major leaguer, serving as a translator for Spanish-speaking teammates and helping their integration to his teams. When he returned to the United States, he enrolled at Stanford University. The Cleveland Indians selected him with the 22nd pick of the first round of the 2002 amateur draft. He was signed by scout Don Lyle and made his pro debut the next summer.

Guthrie made his major league debut with the Cleveland Indians in 2004, but never received more than a token look in Cleveland. He pitched 6 games that season, once in 2005 and 9 times in 2006, making only one start during that period. Considered a bust, he was placed on waivers after that last season and was picked up by the Baltimore Orioles, who immediately inserted him into their starting rotation.

On February 6, 2012, he was traded to the Colorado Rockies in exchange for two solid pitchers, Jason Hammel and Matt Lindstrom, indicating that he was still well-regarded in spite of his poor won-loss record over the previous three seasons. In April of that year, Jeremy landed on the disabled list with an unusual injury: the chain came off while he was riding his bicycle, sending him to the ground, where he landed on his right shoulder. He is an avid bicyclist, using it to keep fit but also as part of an effort to help the environment, and was in the middle of a 30-mile ride along Cherry Creek outside Denver, CO when the fall occurred. When he pitched for the Orioles, he would bike to Camden Yards every day. However, Guthrie generally struggled for his new team, and on June 20th, manager Jim Tracy announced that he was being sent to the bullpen and that the Rockies would be using a four-man starting rotation for the time being; Guthrie was 3-6, 7.02 at that point. On July 20th, the Rockies acknowledged that they had made a mistake and sent Guthrie to the Kansas City Royals in return for another pitcher who had underachieved badly that year, Jonathan Sanchez. Guthrie was 3-9, 6.35 at the time of the trade. He appeared to find some of his groove back after the trade; on August 19th, he pitched one of the best games of his career against the Chicago White Sox, keeping them hitless until two were out in the 7th when Paul Konerko broke up his no-hit bid on an infield single that his teammates later commented should have been scored as an error to shortstop Alcides Escobar; the Sox then got two clean hits off him to start the 8th, at which point he left the game. Tim Collins allowed both runners to score on a ground ball by Dewayne Wise that went through 1B Eric Hosmer's legs, and Guthrie had to be content with a no-decision. The Royals then scored 3 runs in the bottom of the 8th for a 5-2 win credited to Greg Holland. Before the two unearned runs scored, Guthrie had pitched 22 straight innings without allowing a run and had a 3.23 ERA in his first 6 games with Kansas City. He ended the season with an excellent 3.16 ERA in 16 starts for Kansas City, compiling a record of 5-3 with 56 Ks in 91 innings against only 19 walks. Impressed by what they had seen, the Royals signed him to a three-year contract worth $25 million on November 20th.

Guthrie continued to pitch well at the start of the 2013 season, rewarding the confidence shown in him by the Royals. On April 28th, he beat the Cleveland Indians, 9-0 in the first game of a doubleheader to improve his record to 3-0. It was his 16th consecutive start without a loss, dating back to the previous season, matching a team record held by Paul Splittorff in 1977 and 1978. Guthrie was 7-0, 2.44 during the streak, with the Royals winning 14 of the 16 starts. He set a new record on May 4th with a flourish, as he recorded the first shutout of his career in defeating the Chicago White Sox, 2-0. He finished the season with a career-high 15 wins, against 12 losses, as the Royals' most dependable starter after ace James Shields. He topped 200 innings for the 4th time, with 211 2/3, also a career high, but did lead the AL in hits allowed with 136. With a 4.04 ERA, 3 complete games and 2 shutouts, his solid pitching was one of the reasons the Royals managed to stay in the postseason race until the last week of September. The Royals did break their almost thirty-year postseason drought in 2014, and Guthrie was a key part of that team as well, going 13-11, 4.13 in 32 starts and again pitching over 200 innings. He was the fourth starter for the Royals in the postseason, seeing his first action as the starter of Game 3 of the ALCS against his former team, the Orioles; he pitched five solid innings, giving up only 1 run on 3 hits, and the Royals went on to win, 2-1, on their way to sweeping the series. It was Jeremy's first postseason start after 248 regular-season starts. He was tabbed again to start Game 3 of the 2014 World Series against the San Francisco Giants on October 24th. He was a winner that day, pitching five outstanding scoreless innings before giving up a couple of runs and turning the ball over to the bullpen in the top of the 6th. He was then the starter in the decisive Game 7 on October 29th but was tagged for 3 runs in 3 1/3 innings and was saddled with the 3-2 loss tyhat ended the Royals' dream season.

He had an egregiously bad start against the New York Yankees on Memorial Day, May 25, 2015, as he gave up 8 runs in the 1st inning thanks to long balls by Brett Gardner, to lead off the inning, Brian McCann and Chase Headley. In spite of that, he returned for the 2nd inning, but gave up a three-run homer to Stephen Drew before retiring anyone, and was then removed in favor of Brandon Finnegan. His line for the day read 1 inning, with 11 runs allowed, all earned, on 9 hits and 3 walks; his ERA jumped from 4.75 to 6.70 as the Royals were crushed, 14-1. It was a memorable year for the Royals, as they won the World Series, but Guthrie was not on the postseason roster after going 8-8, 5.95 in 30 games. He then spent 2016 in the San Diego Padres and Miami Marlins organizations, going a combined 6-8, 7.17 in 17 games. He did not pitch in the majors that season.

Jeremy was back on a major league mound with the Washington Nationals on April 8, 2017. However, he had an awful start as he gave up 10 runs on 6 hits and 4 walks in only two-thirds of an inning against the Philadelphia Phillies. Enny Romero took over for him and the two combined to give up 12 runs, the biggest inning in Nationals history, and the biggest 1st inning in Phillies history. Guthrie was saddled with the 17-3 loss.