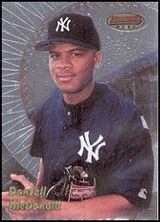 Donzell McDonald is the son of Donzell McDonald, Sr., the brother of Darnell McDonald and Darin McDonald and cousin of James McDonald. He was a LF-CF who was very speedy. At least three times he stole over 50 bases in his professional career, and 7 times he stole over 30. Although power was not his biggest asset, he did show some pop: he hit 7 home runs in 112 games with the Omaha Royals in 2002. Except for his 2000 season, his career strikeout to walk ratio has been pretty sub-par.

He made his major league debut in 2001. He played 5 games with the New York Yankees that year, got 3 at-bats, and 1 hit.

He was last in the USA in the Yankees' farm system, after being in the Cleveland Indians, Kansas City Royals, and Atlanta Braves farm systems. In 2005 he led the Mexican League with 53 steals. Donzell played center field for the Acereros de Monclova in the Mexican League.

Donzell currently resides in Denver, Colorado. He played the role of "Lenny Howell" in the 1999 movie For the Love of the Game.