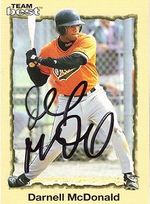 In 1998, McDonald started off with Single-A Frederick, but after only four games and two stolen bases there, he moved to Single-A Delmarva. In 134 games there, he stole 35 bases and hit .261. His 35 stolen bases was a professional career high for him. He stayed with Single-A Frederick for the entire 1999 season, and found moderate success there. In 130 games, he stole 26 bases and hit .266. He earned a promotion to Double-A Bowie in 2000, and his first year a step higher didn't fare him well. He hit .242 in 116 games, and only stole 11 bases.

In 2001, McDonald played in Double-A Bowie and Triple-A Rochester. His statistics greatly improved while with Double-A Bowie that year, and that's why he earned a promotion. Again, though, the promotion didn't make his career stats any better-he hit on .238 and stole only 13 bases in 104 games with Rochester. He started with Bowie again in 2002, hit .292 and stole 9 bases in 37 games with them. This, again, earned him a promotion to Rochester, but this time, he did a lot better. He hit .289 with Rochester in 2002, as opposed to the .238 he hit one year before.

On January 26, 2005, McDonald was signed by the Cleveland Indians to a minor league contract. He played 26 games with the Triple-A Buffalo Bisons, and then went over to the Devil Rays Triple-A team, the Durham Bulls. On June 5. 2005, McDonald was suspended for violating the Minor League Drug Prevention and Treatment Program.

The Cincinnati Reds signed McDonald to a minor league deal in 2009 and invited him to spring training. He made the roster and broke camp with the team as a reserve outfielder. In 2010, he moved to the Boston Red Sox and got to spend most of the season in the majors after starting the season with the AAA Pawtucket Red Sox as a result of the slew of injuries to Red Sox outfielders that season. He hit .270 in 117 games, with 18 doubles and 9 homers, securing a job as a back-up outfielder for the coming years. With the Red Sox having a somewhat healthier outfield crew in 2011, he saw his playing time reduced, but still got into 79 games, hitting .236 with 6 homers and 24 RBI in 157 at-bats. He was used once on the mound, giving up a pair of runs in one inning in a blowout loss.

On May 6, 2012, McDonald was pressed into action on the mound once again, in the 17th inning of a game against the Baltimore Orioles at Fenway Park. DH Chris Davis already had had to pitch the bottom of the 16th for the O's, and escaped without giving up a run, making it the first time since October 4, 1925, that both teams had used position players on the mound in the same game (future Hall of Famers Ty Cobb and George Sisler had pitched that day, in the season's last game). McDonald gave up a three-run homer to Adam Jones that put Baltimore ahead, 9-6, then in the bottom of the 17th capped a frustrating day by hitting into a game-ending double play. He was charged with the loss, while Davis got the win. In spite of his yeoman's service for the team in difficult circumstances over three seasons, the Red Sox handed him his walking papers on July 4th; he had hit .214 in 39 games with a pair of homers and 9 RBI. He was quickly picked up by the New York Yankees, but was asked to cut his trademark dreadlocks upon joining his new team. That assignment was very brief, however, as he was released after only 4 games, during which he went 0 for 4, to make room for CC Sabathia's return from the disabled list on July 17th.