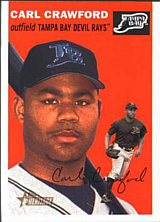 Carl Crawford was a four-time All-Star and four-time stolen base champion who was among the first home-grown stars of the Tampa Bay Devil Rays. He stole 480 bases and legged out 123 triples in a fifteen-season career.

In high school, Carl was heavily recruited as an option quarterback by the University of Nebraska, in addition to traditional powerhouses USC, the University of Oklahoma and the University of Florida. He also had a basketball scholarship offered by UCLA to play point guard. He turned down all offers when he was selected by the Tampa Bay Devil Rays in the 2nd round of the 1999 amateur draft. Crawford hit .219/.257/.281 as the left fielder for Team USA in the 2001 Baseball World Cup. In 2002, he was named International League Rookie of the Year, hitting .297/.335/.456 with 26 steals in 85 games for the Durham Bulls.

On July 5, 2006, Carl became only the eighth man to steal his 200th base before turning 25. He also joined Rogers Hornsby as the only men to increase their batting average and home runs in each of their first five seasons. He enjoyed his third year on top of the triples mountain, hitting 16, stole a league-leading 58 bases, and batted .305/.348/.482 with 18 home runs and 77 RBI. In 2007, he became the first Devil Ray in history to make a return trip to the All-Star Game, homering in the 6th inning against Francisco Cordero of the Milwaukee Brewers in a 5-4 AL victory. His batting average improved for a sixth straight year to a career high .315, part of a .315/.355/.466 season in which he won his last stolen bases crown (50), established a career high for doubles (37), and scored 93 runs.

On May 3, 2009, against the Boston Red Sox, Crawford tied a modern major league mark with six stolen bases in one game. Eddie Collins, Otis Nixon and Eric Young are the only others to have stolen six bases in a game since 1900. That year, he was voted the MVP of the All-Star Game after robbing Brad Hawpe of a home run by climbing over the left field fence in the 7th inning. He bounced back by batting .305/.364/.452, drawing a career-high 51 walks to pair with 28 doubles, 15 home runs and 96 runs scored. His 2010 season was a career year. He hit .307/.356/.495 with 19 homers and 90 RBI - the latter two figures personal bests - led the AL with 13 triples, and scored 110 runs, another career high, for a team that finished with the best record in the circuit. He finished 7th in the voting for MVP and won both a Gold Glove and his first Silver Slugger. At the end of the year, he had played nine seasons for Tampa Bay and was the all-time franchise leader in games played and many other offensive categories. Tampa Bay's chapter of the BBWAA voted him team MVP.

Carl's career year coincided with the end of his contract with the Rays, making him one of the most sought-after free agents. He signed a seven-year deal with the Boston Red Sox worth $142 million. Expectations were very high for Crawford and his teammates, but he never really got going in 2011. Bothered by various nagging injuries, he played only 130 games and hit only .255/.289/.405, the lowest batting average of his career, with only 65 runs scored. He started the season batting first or second in the lineup, but was demoted to the bottom half on April 17th when batting only .127, in the hopes that relieving some of the pressure would help snap out of his funk. His average did not stay in the doldrums, but he continued to bat between the 6th and 8th spots for the remainder of the year. The Red Sox lost out to his old team, the Rays, on the last day of the season, and missed the playoffs altogether. The bad news continued in the off-season, as he underwent surgery on his wrist on January 17, 2012, a procedure that meant he would miss the start of the next season. Literally adding insult to injury, Red Sox owner John Henry stated that he had been "personally opposed" to signing Crawford the previous off-season, but let his baseball men make the final decision.

Crawford hoped to bounce back in 2012, but got off to another frustrating start, this time because of injuries. He was shut down during spring training after experiencing inflammation stemming from his surgery, and remained in Florida when the team headed north. He then began to feel pain in his elbow, and, on April 26th, after a visit to famed elbow specialist Dr. James Andrews, got the bad news that he had a sprained ligament. He finally returned on July 16th, but now his left elbow was giving him trouble, and in late August, the Red Sox announced that he was consulting Dr. Frank Jobe about Tommy John surgery. The surgery was performed on August 23rd, ending his season after only 31 games with a batting average of .282/.306/.479, with 23 runs scored and 19 RBI. Two days later, his brief tenure with the Red Sox ended in dramatic fashion, when he was included in a blockbuster deal with Los Angeles Dodgers that also saw first baseman Adrian Gonzalez, pitcher Josh Beckett and utility man Nick Punto head to the west coast, with a combined $260 million in salary obligations. In his autobiography published in 2013, Carl's former manager, Terry Francona, shed some light on some of the thinking behind his signing by the Sox. According to the book, the Sox brass were concerned about falling ratings for NESN and decided they needed a "sexier" team to appeal more to women viewers. Therefore, the handsome Crawford and Gonzalez were added at great cost, even though their arrival upset the chemistry of a winning team.

Crawford was with the Dodgers for spring training 2013, but soon experienced nerve irritation in his left arm. He was in the lineup as the season opened, playing every day and hitting like his old self. On April 28th, he beat the Milwaukee Brewers almost by himself, hitting a homer off Kyle Lohse on the first pitch of the the game and adding a second solo shot against him in the 5th to account for all of his team's runs in a 2-0 win. He played 116 games that season, hitting .283/.329/.407 with 6 homers and 31 RBI and scoring 62 runs. He was outstanding in the postseason, going a combined 13 for 42 (.310) with 4 homers in two rounds as the Dodgers were eliminated by the St. Louis Cardinals in the NLCS. In 2014, he was limited to 105 games, but did hit .300/.339/.429 with 8 homers and 46 RBI. The Dodgers faced the Cardinals again in the postseason, this time in the NLDS and he went 5 for 17 (.294) in 4 games. Injuries were a big problem in 2015, as he slipped to 69 games played. His line fell to .265/.304/.403 with 4 homers and 16 RBI and he was 1-for-12 when the Dodgers lost to the New York Mets in the NLDS. Crawford's production with the Dodgers was a disappointment given his huge salary, and by 2016, he had become an afterthought. He only had 81 at bats in 30 games over the first two months of the year, hitting .185/.230/.235 without a home run and 6 RBI. On June 5th, the Dodgers bit the bullet and DFAed him with $35 million left on his contract. He was released on June 13th and effectively retired, declining offers to participate in 2017 camps.

After his playing career, he became involved in the music business, starting a label called 1501 Certified Entertainment. His name resurfaced in May 2020 when a five-year-old boy and a woman drowned in the backyard pool of his Houston home in what initial police reports described as an accident. The woman apparently tried to save the boy who had accidentally fallen into the pool, and Crawford tried unsuccessfully to revive them before help could arrive. The guests were there to film a video for an artist on Crawford's music label. While there was no suspicion directed at Crawford for that tragic event, it was not the case shortly thereafter when he was arrested on charges of domestic violence, after reports by his ex-girlfriend. She claimed that he showed up at her apartment to talk things out brandishing a handgun, threatened her, then grabbed her, slammed her head and choked her when she attempted to leave. He then compounded things by sending her menacing text messages after the alleged assault.

Crawford is the cousin of J.P. Crawford. He was briefly engaged to Evelyn Lozada, one of the principal stars of VH1's Basketball Wives. His son Justin Crawford, also an outfielder, was considered a top prospect heading into the 2022 amateur draft, and some sites even had him down as a potential first-round selection. Carl became eligible for the Hall of Fame in 2022 but did not receive any votes and was dropped off the ballot.