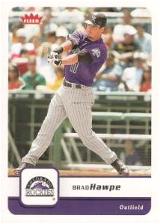 Brad Hawpe was drafted by the Colorado Rockies in the 11th round of the 2000 amateur draft. He was signed by scout Damon Iannelli and made his pro debut that summer.

He was an All-Star with the Rockies in 2009, but had a precipitous fall. He finished the year hitting .285 with 42 doubles and 23 homers, but was no longer a starter in the outfield when the Rockies were defeated by the Philadelphia Phillies in the NLDS. In 2010, he was released after hitting .255 in 88 games and finished the year hitting .179 in 15 games for the Tampa Bay Rays. He signed as a free agent with the San Diego Padres for 2011, expecting to be the starting first baseman in place of Adrian Gonzalez, who had been traded away earlier. He played 62 games, hitting .231 with 4 homers, then went on the disabled list on June 21st. He did not return, as he underwent Tommy John surgery on June 26th. He signed a minor league contract with the Texas Rangers for 2012 and hit .260 in 35 games for the Frisco Rough Riders, without returning to the majors. He moved to the Pittsburgh Pirates but was released as spring training ended in 2013; the Los Angeles Angels of Anaheim next gave him a chance and he started off well in the minors, hitting .305 in 37 for the Salt Lake Bees. He was called up to Los Angeles in early June but hit only 185 in 17 games and was handed his unconditional release on August 4th, ending his career.