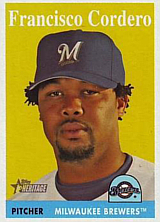 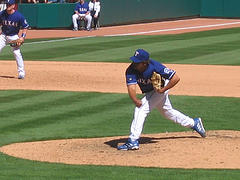 Three-time All-Star Francisco Cordero saved 329 games in fourteen seasons, eclipsing the 40-save mark on three occasions. He is a cousin of Domingo Martinez.

Francisco originally signed with the Detroit Tigers, beginning the long slog to the big leagues as a starter in their minor league chain. Following an injury-addled 1996, he was converted to closing the next year, saving 35 games for the West Michigan Whitecaps. With the Double A Jacksonville Suns in 1999, he earned Southern League Pitcher of the Year honors with 27 saves, a 4-1 record and a 1.38 ERA in 47 games. This earned him a look in the bigs, going 2-2, 3.32 in 20 games. In the off-season, he was part of a mammoth multi-player swap to the Texas Rangers, landing "Juan Gone" Gonzalez to the Motor City.

Francisco's Texas career did not start great. As a middle reliever, he had a 5.35 ERA in 56 games in 2000 before battling injuries again throughout 2001, making only three appearances. He worked his way back from the Triple A Oklahoma City Redhawks in 2002. With his ERA at 7 at the beginning of June, he began to turn it around with his next outing, recording 10 straight scoreless appearances to lower it to a more palatable 2.78. On June 19th, he earned his first save, striking out all three Chicago Cubs batters he faced in an interleague tilt at Wrigley Field. After an earned run allowed to the Boston Red Sox on August 2nd, Francisco allowed only one more all season, finishing the year 2-0, 1.79 with 10 saves in 45 1/3 innings.

On the strength of his 2002 finish, Cordero was bumped up to set-up man for closer Ugueth Urbina for 2003, becoming the closer upon Ugie's deal to the future world champion Florida Marlins in July. He earned 12 of his 15 saves beginning in August, compiling a 5-8, 2.84 line and a career-high 90 strikeouts in 82 2/3 innings. He was handed the closer job in 2004 and reigned supreme. Of his 67 appearances, he completed 63 with a 2.13 ERA and an incredible 49 saves in Texas's 89 wins, a total just behind the all-time greatest at the job, Mariano Rivera. He earned his first All-Star Game trip, improbably not appearing in a game set in Houston at Minute Maid Park. He did not rack up as many saves in 2005 but was still strong, closing the door 37 times with a 3.39 ERA in a fierce 69 games, striking out 79 batters.

The start of the 2006 season was ROUGH for Francisco, things really getting out of hand. At the end of April, proving pitcher records are a bad barometer of indicating success, he was 3-2 with 3 saves and an 11.45 ERA. Akinori Otsuka pushed him out of his closing gig, enabling Cordero lower-leverage work and the chance to get that ERA down to a more respectable 4.15. Two days after he was bombarded for four runs by the New York Yankees, he was included as lead dog among four players (Kevin Mench, Laynce Nix and a minor leaguer the others) bundled to the Milwaukee Brewers in a deal that enabled Nelson Cruz to break on through offensively. Much as Cordero was pushed aside by Akinori Otsuka, he tossed Derrick Turnbow overboard as the Brew Crew closer. He rebounded nicely in a new league, saving 16 of 28 games with a 1.69 ERA to finish a combined 10-5, 3.70 in 77 games.

Sitting pretty in Milwaukee, Cordero started the 2007 season by converting 22 straight save opportunities. He played in his first All-Star Game in making his second trip to the Mid-Summer Classic and finished the year 0-4 with a 2.98 ERA. Additionally, he established the Brewers' new single-season record for saves, lapping Turnbow and Danny Kolb by recording 44, second best to "Papa Grande" Jose Valverde of the Arizona Diamondbacks. He became a free agent at season's end and finally got to cash in with a four-year, $46 million deal in hand from the Cincinnati Reds.

Francisco's time in Cincinnati led to a lot of saves and the team beginning to contend for postseason opportunities again. He picked up his fewest, "merely" 34, in the first season of his pact with a 3.33 ERA and 78 strikeouts in 72 games. In 2009, he made a third All-Star team and his only scoreless appearance in the game itself, this one at Busch Stadium. He took his ERA as low as 1.38 in June and 1.75 in the middle of August before leveling out at 2.16 with 39 saves in 68 games. The next year, 2010, he was finally on a team that made a postseason appearance and was in fine form, saving a best (with the Reds) of 40 games. His strikeout power had begun to crater the previous season, only 58 in 66 2/3 innings, and he only shut down 59 batters in 72 2/3 innings that year. Despite finally making the postseason, he did not make an appearance as the Reds were swept by the Philadelphia Phillies in the Division Series, a series that featured Roy Halladay pitching a no-hitter against the Reds in his postseason debut in Game 1. In 2011, he nearly had more saves than strikeouts, closing the door 37 times with only 42 whiffs in 69 2/3 innings with a 2.45 ERA. On June 1st, he joined the 300 save club, taking down his old pals, the Milwaukee Brewers.

Back on the open market, Cordero took a one-year, $4.5 million deal from the Toronto Blue Jays. He was named closer thanks to injuries to Sergio Santos but his gift was gone, pitching 41 times as more of a righty specialist, tallying 34 1/3 innings with a 5.77 ERA. He was included in yet another multi-man deal at the end of July, going to the Houston Astros, and got absolutely lit up, pitching only six times with a 19.80 ERA and three blown saves. Houston released him on September 10th and he found no takers to get back on the horse in 2013.The Boston Red Sox gave him a minor league deal in 2014, but his big league days went kaput with his release on March 29th.