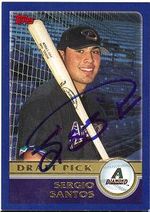 Shortstop Sergio Santos was signed by the Arizona Diamondbacks and scout Mark Baca as the first round pick in the 2002 amateur draft and made his pro debut that summer with the Missoula Osprey, hitting .272 with 9 home runs in 54 games. He split the next season between the Lancaster JetHawks and the El Paso Diablos, hitting .278 with 10 homers between the two clubs. He was back with El Paso in 2004 and hit .282 with 11 home runs in 89 games before being sidelined with a shoulder injury. He spent 2005 with the AAA Tucson Sidewinders. He began the year slowly, batting just .155 in his first 25 games, but he ended the season with a .239 average and 12 homers.

Given his lack of progress as a position player, Santos was converted to pitching at the beginning of 2009 and began to make strides, finding a spot on the Chicago White Sox's roster at the beginning of the 2010 season. He made his major league debut in spite of having spent only one professional season as a pitcher and posting an ERA of 8.16 in the minor leagues. However, his exceptional fastball, rated the best in the entire White Sox minor league system, paved his way to the major leagues. In his rookie season, he got into 56 games and went 2-2 with a 2.96 ERA. In 2011 he took over as the team's closer after Bobby Jenks had left, and recorded 30 saves in 63 games. He gave up only 41 hits in 63 1/3 innings, while striking out 92 batters. While his ERA was a tad high - for a closer - at 3.55, he gave hints that he could soon be dominant in the role. That was certainly the assessment of the Blue Jays, who reacquired him after the season in order to install him as their closer. They gave up a top pitching prospect in Nestor Molina to make the trade on December 6th.

Santos' first season with the Blue Jays in 2012 was a major disappointment. He only pitched 6 times, and was never at full strength, going 0-1 with a pair of saves and an ERA of 9.00. His last game was on April 21st, after which he complained of shoulder pain, was rested, and sent down to the Jays' minor league complex in Florida in order to regain his strength. That regimen failed to work, and shortly after the All-Star break, he underwent shoulder surgery, ending any hope of a return that season. he did a lot better in 2013, but was limited to 29 games at the major league level, during which he went 1-1, 1.75. He had a K/W ratio of 28/4 in 25 2/3 innings, giving the Blue Jays hope that he would be a key contributor in 2014. Alas, instead, the bottom fell out. He was a miserable 0-2, 7.78 in 24 games when the Blue Jays decided to cut him lose on July 22nd; his control was seemingly gone, as attested by the 17 walks he had issued in 19 2/3 innings, and he had also given up 24 hits, leading to a slew of runs. He came back for a couple of appearances in August, in which he gave up another four runs in 1 1/3 innings.

On May 16, 2015, pitching for the Los Angeles Dodgers, he struck out four batters in one inning, one night after teammate Kenley Jansen had done so as well. It was far a dominant inning, however, as he gave up three runs to the Colorado Rockies in between the strikeouts in that 8th inning. He pitched 12 times for L.A., with no record and a 4.73 ERA then was released on June 6th. The New York Yankees signed him three days later, but after only two appearances with them, his season ended as he had to undergo Tommy John surgery. It was the end of his pitching career. As of 2021, Santos works as a pitching coach at the MLB Urban Youth Academy in Compton, CA.