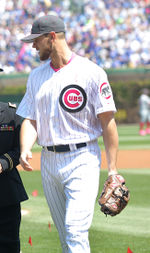 Pitcher Justin Grimm reached the majors with the Texas Rangers in 2012, his second pro season.

He was then taken by the Rangers in the 5th round of the 2010 amateur draft despite his poor junior season. The scout was Ryan Coe. He would make the majors sooner than any of the other 2010 Rangers picks. He made his pro debut the following year with the Hickory Crawdads, going 2-1 with a 3.40 ERA and 54 strikeouts in 9 starts before being promoted to the Myrtle Beach Pelicans in late May. He started 16 games for the Pelicans, posting a 5-2 record and a 3.39 ERA in the regular season and going 1-0 in the playoffs. Baseball America rated him as the #18 Carolina League prospect, between Robbie Ross and Miguel de los Santos.

He began 2012 with the Frisco RoughRiders and was 8-3 with a 1.87 ERA in 13 starts before being called up to the majors by Texas in mid-June to replace the injured Alexi Ogando. At the time, he was second in the Texas League in wins (behind Barret Loux) and leading in ERA.

He made his big league debut on June 16th, starting against the Houston Astros. He gave up a hit to the first batter he faced in The Show, Jordan Schafer, but Schafer was promptly caught stealing, a good thing as Jed Lowrie homered later in the first. From there, he battled Lucas Harrell zero for zero until the 5th, when he yielded two more runs. Robbie Ross relieved Grimm in the 7th and the Rangers rallied for the victory, giving Grimm the win in his debut. He made only 5 appearances in all for Texas - two of them starts - with a record of 1-1 and a 9.00 ERA in 14 innings. He went down to the AAA Round Rock Express after his brief stay in the majors, going 2-3, 4.59 in 9 appearances.

Grimm was back in Round Rock at the start of the 2013 season, but made only one start - a win in which he gave up only one run in 5 2/3 innings - before getting called back to Texas when Matt Harrison went on the disabled list. He made 3 starts for Texas in April, winning 2 and getting a no-decision in the other, and putting up an ERA of 1.59 in 17 innings. It was enough to be named the American League's Rookie of the Month for April, beating out teammate Nick Tepesch, who was 2-1, 2.53, over the same span. On May 24th, in a start against the Seattle Mariners, he pulled off a tremendous heist. In the 2nd inning, Jesus Sucre hit a grounder to 1B Mitch Moreland for a potential double play; Moreland threw to SS Elvis Andrus at second for the first out, and Andrus threw back to first to cut off Sucre. But Grimm was moving to cover first, and crossed in front of Moreland, catching the throw while well away from the bag. However, he casually moved away from the play with the ball in his glove, and umpire Jeff Nelson was fooled, thinking Moreland had caught the ball to complete the twin killing. He called Sucre out, and later admitted his mistake, but only after seeing the replay of the highly unusual play. Indeed, Grimm did such a good selling job that on-deck hitter Brendan Ryan admitted he never saw that he had caught the ball, and Mariners manager Eric Wedge came out to argue - but only that Moreland's foot was off the bag, not that another player altogether had caught the relay throw ! He was at 7-7, 6.37 after 17 starts when he was traded to the Chicago Cubs along with Mike Olt and C.J. Edwards in return for veteran pitcher Matt Garza. he went 0-2, 2.00 in 10 games with the Cubs to complete the 2013 season.

Grimm became an important member of the Cubs' bullpen from 2014 to 2017, working as a middle reliever and pitching at least 50 games each year, with a high of 73 his first full season with the team. He was rarely used to close game, saving a total of 4 wins during that span and also had relatively few decisions. He was often used for short stints, averaging less than an inning per appearance and serving as the righty part of a left/right tandem in the middle innings of games. His best year was 2015, when he recorded 3 of his 4 saves and had an ERA of 1.99, while striking out 67 batters in 49 2/3 innings. he pitched in the postseason that year and in 2016, making a total of 9 appearances. It was either feast or famine during that span: in three of the five series he pitched in, he did not allow an earned run, but in each of the other two - the 2016 Division Series and the 2016 World Series, his ERA was a bloated 18.00. For example, he allowed 4 runs in 2 innings against the Cleveland Indians when the Cubs became World Champions in 2016. His results were poor in 2017, as he posted an ERA of 5.53 and was not used in the postseason, then on March 15, 2-18, the Cubs gave him his release after he had given up 4 runs on 6 hits and 4 walks in 4 innings of Cactus League action. He did not stay unemployed long, as on March 18th he signed a one-year deal with the Kansas City Royals.