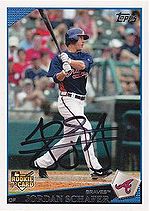 Jordan Schafer was a top prospect entering 2008 but a drug suspension tarnished his reputation early in the year. He made his major league debut with the Atlanta Braves on Opening Day 2009.

Schafer was a two-way high school star. He hit .478 and slugged .957 as a senior. He stole 50 bases and scored 52 runs in 92 AB. He was 11-0 on the mound with a 0.71 ERA, striking out 140 in 76 innings while allowing 12 walks and 39 hits. Baseball America named him as a second-team high school All-American utility player alongside Buster Posey and behind only Colby Rasmus and Zach Putnam. The Atlanta Braves picked Schafer in the third round of the 2005 amateur draft. He was signed by scout Gregg Kilby and made his pro debut that summer.

Jordan made his professional debut with the GCL Braves, hitting only .203/.256/.352 in 49 games. He stole 13 bases to lead his team but was thrown out running six times.

Schafer went from middling prospect to top prospect status in 2007. He batted .372/.441/.636 in 30 games for Rome and .294/.354/.477 with 34 doubles, 70 runs, 8 triples and 19 steals (in 30 tries) in 106 contests for the Myrtle Beach Pelicans. He led Braves minor leaguers in runs (86), hits (176), total bases (290), doubles (49) and slugging (.513). He led the affiliated minors in hits and was third in doubles behind Zachary Daeges and Delwyn Young. Baseball America rated him as the best defensive outfielder in the Carolina League and as having the best outfield arm in that circuit. He made the league All-Star team, joining Mitch Einertson, Jose Duarte and Brad Corley in the outfield. He ranked 4th in the Carolina League in average trailing Billy Hart, Einertson and Matt Rogelstad. Baseball America named him as the best prospect in the Carolina League, followed by Chris Marrero, Elvis Andrus, Max Ramirez and Wes Hodges.

When the Braves let Andruw Jones go via free agency, Schafer was projected as the long-range answer in center field.

Schafer hit .324 in the Arizona Fall League and was named to the AFL All-Prospect team. He then batted .316 in spring training and Bobby Cox said he would have been the Atlanta center fielder if they didn't have Mark Kotsay.

Schafer started 2008 just 1 for 11 for the Mississippi Braves. He then was suspended for 50 games by Major League Baseball for his use of Human Growth Hormone. He finished the season with a line of .269/.383/.471 in 84 games and made no outfield errors. Baseball America rated him as the #13 prospect in the Southern League.

He then made the Braves roster in spring training of 2009 and was the starting center fielder for the Major League Baseball opener against the World Champion Philadelphia Phillies on April 5. He hit a home run off Brett Myers in his first at-bat and went 2 for 3 overall with an intentional walk in Atlanta's 4-1 win. Of all the players in baseball history who hit a home run in their first plate appearance, Schafer was the only one to do it on Opening Day against the defending champions. He started slumping early after that, however, and was sent down on May 31 after his batting line had slipped down to .204/.313/.287 with 63 strikeouts in 167 at-bats. He had only hit one other homer since his debut. Demoted to AAA Gwinnett, he only played six games before going on the disabled list with pain in his left wrist due to a bone bruise suffered on opening day. He returned in late June but was soon shut down for the season, having only gone 8 for 35 in the minors. He played only 52 games at Gwinnett in 2010, after some rehabilitation time in A ball and AA, hitting .201/.255/.254 with one homer. He became a forgotten man in the Braves' organization, with Jason Heyward having claimed a starting job in Atlanta's outfield, and Freddie Freeman emerging as the hitting prospect to watch at Gwinnett.

Schafer bounced back in 2011. Back in Gwinnett for the third year in a row, he was hitting .256 in 42 games, without much power, when he got the call back to the Show as a result of CF Nate McLouth going down with an injury. He was hitting .229 in his first nine games when he got a scare on June 3rd, fouling a ball off his face while trying to bunt against Jon Niese of the New York Mets. He had to leave the game but did not sustain any major injury. he was hitting .240/.307/.316 with 7 homers in 42 games when he was traded to the Houston Astros at the trading deadline on July 31st. The Braves also sent youngsters Juan Abreu, Paul Clemens and Brett Oberholtzer to Houston to obtain CF Michael Bourn. In 30 games with Houston, he hit .235 with one homer. After the season, on October 4th, he was arrested in the small hours of the morning while driving in Tampa, FL and charged with possession of marijuana after a police officer noticed a characteristic odor emanating from his sports utility vehicle.

Schafer was the first batter to face 49-year-old Jamie Moyer in his return to the majors after a year-and-a-half away on April 7, 2012 and took the Colorado Rockies' hurler deep in his first at-bat for his first long ball of the season. He was the Astros' starting centerfielder from the start of the season and on April 22nd, hit his first career grand slam, against Chad Billingsley of the Los Angeles Dodgers, to propel Houston to a 12-0 win. He played a career-high 106 games for the Astros that season, hitting .211/.297/.294 with 4 homers and 23 RBI as the regular centerfielder for the last-place team, although he did steal 27 bases in 36 attempts. A shoulder injury sharply cut his playing time during the last two months. Disappointed with his production, the Astros placed him on waivers at the end of the year, and he was claimed by his former team, the Braves, on November 1st.

Jordan played for the Braves in 2013 and 2014, hitting .247 in 94 games as a back-up outfielder the first year, and .163 in 63 games but only 80 at-bats the second. He played in the postseason for the first time in 2013, going 0 for 1 in the NLDS which the Braves lost to the Los Angeles Dodgers. On August 3, 2014, the Minnesota Twins claimed him off waivers from the Braves and he spent the remainder of the season in the Twin Cities, hitting .285 in 41 games. That good finish allowed him to claim a spot as a back-up outfielder on the Twins' roster at the beginning of 2015. he hit .217 in 27 games but was placed on the disabled list on May 16th with a right knee strain. When he was ready to come back a month later, the Twins, having plenty of promising young outfielders in their system, had no place for him, and gave him his release. He failed to find another team and spent the remainder of the season idle.

On January 14, 2016, Schafer signed a free agent deal with the Los Angeles Dodgers. What was interesting about the signing was that the Dodgers stated that they would look at him primarily as a lefthanded reliever who could help out occasionally in the outfield or as a pinch-hitter. This in spite of the fact that he had not pitched since his high school days. He pitched 40 games at three levels in the minors that season, going 1-1, 3.83 in 49 1/3 innings. He as hit hard in AAA, with an ERA of 9.95 in 6 games for the Oklahoma City Dodgers, but things went much better in AA with the Tulsa Drillers, where his ERA was 3.15. The following December, he signed a deal with the St. Louis Cardinals and received an invitation to spring training as a non-roster player. The Cardinals were also looking at him as a potential two-way player. However, plans were put on hold as he suffered an elbow injury that spring and was likely to need Tommy John surgery.