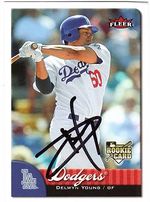 Delwyn Young is part of a large baseball clan. He is the son of Delwyn Young Sr., who played from 1981-1994 and spent time in AAA. He is the nephew of Selwyn Young, a college coach and former minor leaguer. His grandfather Fate Young scouted for over 35 years. He tied the modern PCL record for doubles in 2007.

Young was a batboy for the Lancaster JetHawks. In 2000, he was taken in the 31st round of the 2000 amateur draft by the Atlanta Braves but opted for college. In 2001, he helped Riverside City College to a California title. The Braves picked him in the 29th round of the 2001 amateur draft; he again did not sign with them.

Young returned for another year in college, then was picked by the Los Angeles Dodgers in the 4th round of the 2002 amateur draft. Though he had a scholarship offer from powerhouse Cal State Fullerton, he was signed by scout James Merriweather.

Delwyn hit .300/.380/.508 for the Great Falls Dodgers in 2002. He tied for second in the Pioneer League with 10 home runs, trailing only Ryan Shealy. He failed to make the Pioneer League All-Starteam at 2B as Alberto Callaspo was chosen.

In 2003, Young was with the South Georgia Waves and produced a batting line of .323/.381/.524 with 38 doubles, the most of any Dodgers farmhand. He tied Bernie Gonzalez for the most doubles in the South Atlantic League while pacing the circuit in slugging percentage and extra-base hits (60). He was third in average, trailing Chaz Lytle and Jorge Cortés. The one down spot was his defense, leading the league's second basemen with 32 errors. Baseball America rated him as the #16 prospect in the SAL and the #10 prospect among second basemen in baseball. He made the SAL All-Star team at second.

Young whiffed 134 times in 2004, leading LA's minor league chain. He hit .281/.364/.511 with the Vero Beach Dodgers with 36 doubles, 22 homers and 85 RBI. He led the Florida State League in total bases (240) and extra-base hits (61) but finished 60 points behind slugging leader Brandon Sing. He again led his loop's second sackers in errors (23). He made the league All-Star team at second base. Baseball America chose him as the 18th-best prospect in the FSL.

Called up to the majors in September, the Californian appeared in 8 games for the 2006 Dodgers, all off of the bench. He debuted as a pinch-hitter for Toby Hall against Aaron Heilman and grounded out to Jose Valentin.

He made the Pacific Coast League All-Star outfield in 2007 alongside Adam Jones and Rick Ankiel. Young hit a dazzling .337/.384/.571 with 54 doubles, 17 home runs, 107 runs and 97 RBI. He was 4th in the PCL in average and 6th in RBI while scoring the most runs. Most impressively, he hit the most doubles in the league since 1966, tying Walt Williams' record for the modern era (though far back of Paul Waner's all-time mark of 75). Young tied Bubba Bell for 5th in the affiliated minors in average, was 4th with 76 extra-base hits and was 2nd in doubles (one behind Zachary Daeges).

Young hit .194/.421/.419 as the left fielder for Team USA for the 2007 Baseball World Cup; his 7 walks were one behind team leader Colby Rasmus. He hit a key 3-run homer in the 5-1 win over the Japanese national team. In the Gold Medal game, Young got the US offense going with a second-inning single off of Yadel Marti and came around to score in a 6-3 win. It was the first time that the US had ever beaten Cuba in the Gold Medal game of a Baseball World Cup.

When the Dodgers opened 2009 with Manny Ramirez, Matt Kemp and Andre Ethier, opportunities were limited for Young. He was designated for assignment. The Pittsburgh Pirates then acquired him for two minor league players to be named later or cash considerations, to help bolster their bench, where he replaced Luis Cruz. Young said "I'm relieved...not surprised." The trade was completed when Pittsburgh sent Eric Krebs and $1 to the Dodgers in late May. Young started very strong and won the second base job when Freddy Sanchez was traded away. He slumped badly in September to finish at .266/.326/.381 for a 89 OPS+ while fans criticized his fielding at second (though his fielding percentage and range factor were both right around league norms). He had hit .311/.385/.417 in the first half but only .239/.289/.360 in the second half.

Young began 2010 as a utility man for the Pirates, filling in in the outfield and at third base while pinch-hitting regularly. The day before Stephen Strasburg's MLB debut, Delwyn said that baseball's top prospect was just another pitcher. He made that sentiment ring true on Strasburg's debut, with a 2-run homer that was the only mark on Strasburg's day.

Young became a coach with the Kingsport Mets in 2018 and Brooklyn Cyclones in 2019. He managed the State College Spikes in 2021, then moved to the Washington Nationals' organization as hitting coach of the Fredericksburg Nationals in 2022.