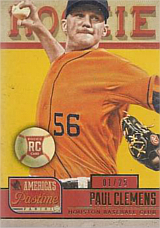 While attending Louisburg College, Paul was drafted by the San Francisco Giants in the 36th round in the 2007 amateur draft, but did not sign. In the 2008 amateur draft, he was selected by the Atlanta Braves in the 7th round and signed with scout Billy Best. He began his career with the GCL Braves, picking up a win in his only appearance on the mound. He moved on to the Danville Braves and Rome Braves that first season, ending the year with a record of 4-4, 3.58 in 14 games, including 9 starts. In 2009, he spent the entire year with Rome in the South Atlantic League, but the results were disappointing. He went 6-5 with 3 saves but a bloated 5.91 ERA in 26 games and lost his position as a regular starter. With his career in jeopardy in 2010, he was a swingman again, but did well in Rome, with a 1.42 ERA (2-0, a save) in 8 games; he moved up to the Myrtle Beach Pelicans of the Carolina League where he was 0-4 with a decent 3.69 ERA, two saves and a good K/BB ratio of 65/28 in 65 2/3 innings. He started the 2011 season in AA, with the Mississippi Braves of the Southern League, and was 6-5, 3.73 in 20 starts. Paul was included in a July 31st trade with the Houston Astros in which the Braves obtained outfielder Michael Bourn for outfielder Jordan Schafer and three mid-level prospects - Clemens, Brett Oberholtzer and Juan Abreu. Clemens finished the year with 5 very solid starts for the AA Corpus Christi Hooks and one start in AAA with the Oklahoma City RedHawks in which he was lit up.

Clemens started 2012 at Corpus Christi, where he was 3-2, 2.36 in 7 starts, then was promoted to Oklahoma City in the Pacific Coast League, going 8-8, but with an awful 6.73 ERA and .341 opponent average in 20 more starts. He gave up a whopping 145 hits in 101 2/3 innings. The only positive was that his control remained good, with 68 strikeouts and 32 walks in AAA. He began 2013 back in Oklahoma City, and after winning his first start there was promoted to the bigs when Rule 5 pick Josh Fields was placed on the disabled list on April 8th.

Paul made his major league debut on April 9th with a win against the Seattle Mariners, but it came more in spite of his performance than because of it. Given a 13-0 lead after Erik Bedard left after four innings, he gave up 5 runs in four innings, including homers to Jason Bay, Raul Ibanez and Mike Morse; he walked one batter and did not strike out anyone, but as Bedard had not pitched long enough to qualify for the win, he was gifted the credit for the Astros' 16-9 victory (Hector Ambriz gave up another four runs in a painful 9th inning for Houston, but its lead was large enough for that not to change the final outcome). Paul pitched 35 times with the Astros that season, more than half of his total big league work, to a 4-7 record and 5.40 ERA in 73 1/3 innings. He was designated for assignment in September 2014 on the heels of a disappointing 0-1, 5.84 line in 13 games, then spent the entirety of 2015 in the minors.

Paul returned to the big leagues on June 20, 2016, making two uninspiring starts for the Miami Marlins before being claimed on waivers by the San Diego Padres. On August 6, 2016, playing against the Philadelphia Phillies, he got a bit of unwanted publicity when he took the field in a generic jersey marked "Player" where his name would be and sporting the spring training-like number 91. He had soiled his regular jersey with pine tar in preparing for a plate appearance and, lest anyone think he had the substance on him in order to doctor the baseball, he decided to change his top... except there was no replacement jersey in his name to be found. So he took the mound embodying a generic "create-a-player" from a video game. He did manage to stay in the game long enough for a clubhouse attendant to retrieve a uniform with his number 47 and his name but not before teammate Jon Edwards, in the dugout, had pinned a sheet with "Player #2" scribbled on over his own name in solidarity. Even more hilariously, Paul would be pulled from the game after failing to run out a bunt in the 5th inning. Though he was a serviceable 3-5, 3.67 in 16 games, he was released during spring training 2017, never to return to a big league bump.