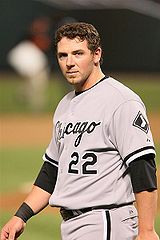 Josh Fields was selected by the Chicago White Sox with the 18th overall pick in the 2004 amateur draft and signed by scouts Alex Slattery and Nathan Durst. As a college athlete at Oklahoma State University, Fields excelled on both the baseball diamond and the football field. He was the second slugging quarterback drafted by the White Sox in less than five years, as the team chose Joe Borchard out of Stanford University in the 2000 amateur draft. Fields powered his way through the minor leagues, and debuted with the White Sox in 2006. He started the 2007 campaign with the Charlotte Knights before being called up to the White Sox in early June. He totaled 23 home runs in just 373 at bats, but Fields also struck out 125 times.

Additionally, Fields was Oklahoma State's quarterback. He passed for 3145 yards and 31 touchdowns in 2002, and led the Cowboys to consecutive victories over the University of Oklahoma. With the help of future NFL players Tatum Bell and Rashaun Woods, the school also appeared in two bowl games while Fields was under center. The Oklahoma native skipped his final year of college eligibility to play professional baseball.

The next year, the 22-year-old was promoted to the AA Birmingham Barons, and he hit .252/.341/.409 with 16 home runs and 79 RBIs. He also struck out 142 times, two less than Southern League leader Corey Smith. Fields followed with a strong campaign in 2006. The budding masher posted a .305/.379/.515 line with 32 doubles, 19 homers, 70 RBIs, 85 runs (leading the league), and 28 steals in 33 tries for the Charlotte Knights. Fields tied Dustin Pedroia for second in the International League in average, trailing only Josh Phelps.

During the 2006 season, he was coveted by several teams including the San Diego Padres during trade discussions. However, he remained in the White Sox system. Baseball America rated him as the best batting prospect in the International League that year and the #6 overall prospect in the league. He made the IL All-Star team at third base and won the league Rookie of the Year Award.

He was added to the White Sox active roster when his contract was purchased on September 10, 2006. On September 18th, Fields homered in his first major league at bat; it was a solo blast off of Jamie Walker. He finished the season with three hits: the home run, and two doubles.

The former first round pick was hitting .283 with a .394 on base percentage for Charlotte when he was called back to the majors in the early summer of 2007. Fields' 23 home runs were fourth best on the club behind Jim Thome, Paul Konerko, and Jermaine Dye. Only Thome struck out more often than the rookie. The White Sox also split the young player's time between third base and left field.

In 2010, Fields was delt to the Kansas City Royals along with Chris Getz in exchange for Mark Teahen. Getz quickly became the Royals' everyday second baseman in 2011, while Fields did not make the major league roster.