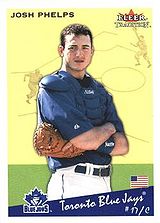 Josh Phelps is the all-time leader in games, hits, doubles, triples, home runs, and RBI by a player born in Alaska as of 2006. Phelps began his career with a bang but was a bench player from 2005-2007 and is now out of the Major Leagues.

In 1999, the 21-year-old made major strides. His batting line was .328/.379/.562 and he had 27 doubles, 20 home runs and 88 RBI. He struck out 104 times in 406 AB with only 28 walks. The Dunedin Blue Jays player was used primarily at DH, a position at which he made the Florida State League All-Star team. He was second in the FSL in average behind Allen Dina and ahead of teammate Michael Young. Phelps led the league in slugging percentage. He tied for 4th in home runs, but was only 3 behind leader Morgan Burkhart. Dunedin had the best regular-season record. He hit .345 in the playoffs but Dunedin fell in the finals. Baseball America rated Phelps as Toronto's #5 prospect.

Phelps missed the beginning of the 2000 season due to right elbow surgery. He hit 21 home runs that year, 9 for the Tennessee Smokies and 12 for Dunedin. He batted .228/.308/.435 for Tennessee and .319/.386/.699 in 30 games for Dunedin. In the FSL playoffs, he batted .450. He made his MLB debut as a 6th-inning defensive sub for Alberto Castillo on June 13, striking out an inning later against Willie Blair. Baseball America dropped him to 10th on the Blue Jays prospect list.

In 2001, Phelps rebounded very well. He led Jays farmhands in total bases (273), doubles (36, tied with Orlando Hudson), home runs (31) and RBI (97) and Baseball America named him Toronto's minor league player of the year. Splitting time pretty evenly between DH and catcher at Tennessee, he hit .292/.406/.562 with 95 runs, 80 walks and 127 strikeouts. He went 0 for 1 as the backup AL catcher in the Double-A All-Star Game behind Mike Rivera. Baseball America ranked him as the #1 Jays prospect, the #2 catching prospect in baseball, behind Joe Mauer only, and the #9 prospect in the Southern League, one slot ahead of Carl Crawford. Phelps finished sixth in the SL in average and led the league in homers, doubles, total bases and extra-base hits (68). He was one RBI behind leader Joe Borchard, second in slugging to Ben Broussard, third in OBP behind Graham Koonce and Broussard, tied for second in walks behind Koonce and tied for second in runs behind teammate Reed Johnson. He won the SL MVP Award as a result of his strong season and was the All-Star catcher. In a brief stint with the major league club, he was 0 for 12 with two walks.

Phelps hit .333 for the Scottsdale Scorpions in the 2001 Arizona Fall League.

He began 2002 with the Syracuse SkyChiefs and batted .292/.380/.658 with 24 home runs, 50 runs and 64 RBI in 70 games. He was back at DH primarily with Kevin Cash doing the catching. At the time of his promotion to Toronto, he was leading the International League in homers - and he still tied for 4th, 3 behind leader Izzy Alcantara despite never returning to AAA that year. Phelps had impressed enough that he would again be named Jays Minor League Player of the Year by Baseball America. But that was only half of his season - in Toronto, he batted .309/.362/.562 for the 2002 Blue Jays, adding another 15 home runs. Overall that year, he had 40 doubles, 39 home runs, 122 RBI and 91 runs. Through 2007, it clearly was a career year. He led Jays minor leaguers in home runs. Baseball America rated him as the #6 prospect in the IL ahead of players like Chase Utley and Joe Crede. He got a few votes for the 2002 American League Rookie of the Year Award and had the second-best OPS on the Jays, behind only Carlos Delgado. He had the best average and slugging percentage of any AL rookie that year.

Phelps was signed by the Detroit Tigers but never played for the world champions. Instead, he manned first base and DH for the Toledo Mud Hens and led Tigers minor leaguers with 143 hits. Phelps batted .308/.370/.532 with 24 home runs and 90 RBI while whiffing 124 times. He led the International League in batting average, edging out Josh Fields and Dustin Pedroia (both .305). He was the only All-Star on the IL champions, making the league All-Star team at DH. He cracked four home runs in the playoffs, tying Dustan Mohr for second, one behind Mike Hessman.

Phelps signed a deal with the Baltimore Orioles in November of 2006 but was then picked by the New York Yankees in the 2006 Rule V Draft. He hit .263/.330/.363 in 36 games for the 2007 Yankees and played one inning as catcher for the first time since his rookie year, then was designated for assignment in mid-June to make room for Andy Phillips on the roster. The Pittsburgh Pirates claimed Phelps to strengthen their bench, demoting Brad Eldred after a one-game stay with the club. Phelps was to back up Adam LaRoche at first base (oddly, through June of 2007, LaRoche is the most comparable player to Phelps using the similarity scores method).

Phelps hit .456 in his first 32 games with Pittsburgh, slugging over .800. He had hits in 9 of 10 at-bats (including 3 homers) at one point. Unfortunately, he got few starts, as LaRoche had finally begun to hit after struggling all season, and Pittsburgh felt uncomfortable with Phelps behind the plate. He took some grounders in practice at third but was not playing there in games. Overall, Phelps hit .351/.463/.649 with 19 RBI in 73 AB for the 2007 Pirates with a whopping 187 OPS+.

Despite his fine performance for Pittsburgh, they did not offer him a new contract and he signed instead with the St. Louis Cardinals for 2008 but failed to make the team. He went 9 for 34 with a double and two walks for the 2008 Cardinals, spending most of the year dominating AAA. He hit .291/.373/.568 with 31 homers, 90 runs and 97 RBI for the Memphis Redbirds. He tied Joe Koshansky and Brandon Wood for third in the 2008 PCL in home runs, behind Dallas McPherson and Nelson Cruz. He tied Koshansky for 7th in runs and was 9th in RBI.

For 2011, Phelps signed with Rimini in Italy. He batted cleanup and manned first base on Opening Day and did very well with three walks, a single, two runs and a RBI in four trips to the plate as Rimini beat Godo.