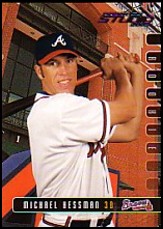 Mike Hessman was one of the greatest power hitter in minor league history. The International League MVP in 2007, he hit 31 homers and drove in 101 runs that year, when he was also the league's All-Star third baseman. He had tremendous power with a tendency to seldom walk and to strike out way too much.

He began his professional career with the GCL Braves in 1996 after being a 15th round choice by the Atlanta Braves in the 1996 amateur draft out of high school. He only hit 1 home run in 53 games in his maiden season, but began to show his power the next year, with 21 homers in 122 games for the Macon Braves of the South Atlantic League. It took him until 2002 to reach AAA with the Richmond Braves, and he made his major league debut with Atlanta in 2003, getting into 19 games. He hit his first big leagie homer in his second game, off Mike Stanton on August 26th. He also split the 2004 season between Richmond and Atlanta but hit only .130 in 29 games in the National League. He became a free agent after that season and joined the Detroit Tigers organization in 2005, with the Toledo Mud Hens. He played briefly with Detroit in both 2007 and 2008.

Hessman struggled in the 2008 Olympics in Beijing, going 2 for 22 as the worst hitter for Team USA, which won Bronze. He split time with Matthew Brown at third base. Both of his hits came in a one-run loss to eventual Gold Medal winner South Korea; one was a solo homer off closer Ki-joo Han.

He hit his first major league triple under unusual circumstances. Playing for the New York Mets on August 13, 2010, he hit a ball to deep left field at Citi Field against Cole Hamels of the Philadelphia Phillies. The umpires initially ruled it a home run, but after LF Raul Ibanez and manager Charlie Manuel complained, the umpires went to a video review, and after six minutes of looking at replays, declared that the ball had not cleared the fence and placed Hessman on third base.

Hessman signed with the Orix Buffaloes for 2011. He debuted on Opening Day, April 12th. Pinch-hitting for Shunta Goto, he was retired by Tsuyoshi Wada in a 2-2, 12-inning tie. In his only season in Japan, he played 48 games for Orix, hitting .192/.261/.377 with 6 homers and 14 RBI. He returned to the United States in 2012, joining the Oklahoma City RedHawks of the Houston Astros organization.

On May 20, 2014, he became the 8th player to have hit 400 homers in the U.S. minors when he connected off Scott Diamond of the Rochester Red Wings while playing for the Toledo Mud Hens of the Tigers organization. It was his 12th season in AAA, and his 6th playing for Toledo, which had previously been his team from 2005 to 2009. The top four minor league leaders for home runs had all spent the bulk of their careers in Mexico, making Mike only the 4th player to reach the 400-homer mark solely in U.S.-based leagues. Around that time, he started to be called "the real-life Crash Davis", a reference to the fictional player who sets the career minor league home run record in complete anonymity in the movie Bull Durham.

On June 30, 2014, he hit his 259th home run in the AAA International League, becoming that league's all-time leader, breaking Ollie Carnegie's 69-year-old record. Hessman hit 13 more to raise that record to 272 by that season's end. In 2015 he closed in on Buzz Arlett's mark for most homers in the U.S.-based minors of 432, tying him on July 29th and passing him with a grand slam off Dustin McGowan on August 3rd, which turned out to be his final professional home run. He was still behind the four Mexico-based players on the all-time minor league home run list, led by Hector Espino and his 484 homers. Hessman did not catch them, as he retired as a player at the end of the season with 433 homers.

Hessman then decided to start a second career in coaching. He was already acting as a mentor to young players on the Mud Hens in his final few seasons and in 2016 was hired by the Tigers as a hitting coach for the Connecticut Tigers. He was a hitting coach for the West Michigan Whitecaps in 2017, Erie Sea Wolves in 2018, and Toledo Mud Hens in 2019. He was scheduled to return to Toledo in 2020 before the season was cancelled due to COVID-19. He then coached Toledo in 2021 until June. When Jose Cruz was named head coach at Rice University, Hessman was promoted to the major league staff and was replaced by Jeff Branson in Toledo.