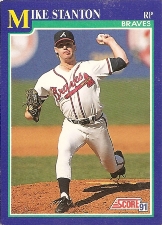 Reliever Mike Stanton played nineteen seasons in the majors, most notably as a member of the Atlanta Braves and the New York Yankees. He appeared in 1,178 career games (second all-time to Jesse Orosco).

On July 31st, 1995, Stanton was traded to the Boston Red Sox, and one year to the day later, he was dealt to the Texas Rangers. Following the 1996 season, he became a free agent and signed with the New York Yankees. Over the next six years, he was a mainstay in the Mariano Rivera-led bullpen, appearing in at least 64 games each year and appearing in the postseason every season. He was 9-4 with a 2.58 ERA in 2001 and appeared in the All-Star Game that summer. After the 2002 season, he moved across town to the New York Mets as a free agent, and after two years, he was traded back to the Yankees for Felix Heredia. He spent the final three years of his career bouncing from the Yankees to the Washington Nationals to the Boston Red Sox, back to the Nationals, then to the San Francisco Giants and the Cincinnati Reds. He tried to return to the majors with the Chicago Cubs in 2009 but was released before the season began.

Stanton became eligible for election to the Hall of Fame in 2013 but did not receive any votes and was dropped from the ballot.

Following his playing days, Stanton was head baseball coach at Don Bosco Prep in 2010. Since 2013, he has been a studio analyst for Houston Astros television broadcasts.