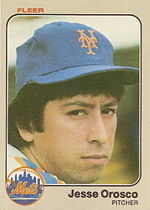 The all-time leader in games pitched, Jesse Orosco also had the rare distinction of playing in the major leagues in four different decades. His son, Jesse Orosco, Jr., was drafted in the 2008 amateur draft.