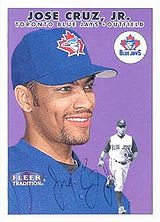 "Cruz played with my son side-by-side all the way through. And I'd say Jose was, average up until his junior year. But his junior year it was like somebody hit a light switch, like a bolt of lightning hit him and he just exploded." - former major leaguer Jerry Davanon, talking about Cruz's development as a youth and playing with Jerry's son Jeff Davanon then

He is the son of Jose Cruz, nephew of Tommy Cruz and Hector Cruz, brother of Jose E. Cruz, more commonly known as "Enrique", and Cousin of Cirilo Cruz and Alberto Cruz. His nickname "Cheito" (little Cheo) presumably comes from being the son of Jose, whose nickname was "Cheo". His son Trei Cruz was drafted by the Detroit Tigers in the 3rd round of the 2020 amateur draft. Another son, Anthony Cruz, played at Rice University alongside Trei.

Jay Buhner, Roberto Kelly, and Alvaro Espinoza all played with both Jose Cruzes.

He played for the Santurce Crabbers and the Ponce Lions of the Puerto Rico Winter Baseball League.

He set 15 records while at Rice University and was a three-time All-American. While in high school, he led his team to a #1 national ranking in 1992. He was the Seattle Mariners Minor League Player of the Year in 1996.

Cruz was traded away by the Mariners, who were in dire need of bullpen help, to the Toronto Blue Jays on July 31, 1997. The deal was criticized by M's fans at the time, as Cruz was seen as the left fielder of the future and had just secured the everyday job, but the Mariners received Paul Spoljaric and Mike Timlin in return. For the Blue Jays, he set a team record with homers in six consecutive games in 2001, a record which held until shattered by Kendrys Morales in 2018.

Though known as a good fielder - he won a Gold Glove that year -, Cruz dropped a fly ball off the bat of the Florida Marlins' Jeff Conine, leading off the bottom of the 11th inning in Game 3 of the 2003 NLDS, with the San Francisco Giants having taken the lead, 3-2, in the top half of the inning. The error proved extremely costly as the Marlins came back to win the game, then eliminated the Giants in the next game on their way to their second World Championship.

He was later wan ESPN analyst. In 2021, he was named a major league coach with the Detroit Tigers. That role did not last long as he was named head coach of Rice University in June. Cruz's last game with the Tigers was on June 12th and he was replaced on staff by Mike Hessman.