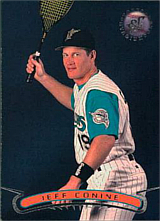 First baseman/oufielder Jeff Conine was a two-time All-Star during his seventeen-year career. Known as "Mr. Marlin" for his work with the Florida Marlins, he was a member of the inaugural Marlins squad in 1993 and the only player to have played on both of the team's World Series champions, in 1997 and 2003.

Originally a pitcher, Conine went 5-4 with a 6.06 ERA and 2 saves in three seasons at UCLA. He was selected by the Kansas City Royals in the 58th round of the 1987 amateur draft. Moved to first base, he made his pro debut in 1988 with the Baseball City Royals, hitting .272 and leading his club with 10 home runs and 59 RBI. Back with Baseball City the next year, he hit .273 and clubbed 14 homers to lead the team again. He had a breakout season in 1990, hitting .320 with 15 home runs and 95 RBI, and was named Southern League Most Valuable Player. As a result, he earned a September call-up to the majors. He made his big league debut on September 16th, as a pinch hitter facing the Cleveland Indians, and got his first start and hit the next day against the Minnesota Twins. Limited to 51 games with the Omaha Royals in 1991 due to a wrist injury, he returned in 1992 and hit .302 with 20 homers. He earned another late-season call up to Kansas City that year, hitting .253 in 28 games.

Conine put together another fine year in 1996, hitting .293 with a career-best 26 homers. His numbers dipped the following year, when he hit .242 with 17 home runs, but the Marlins reached the postseason for the first time in franchise history. He hit .364 in the NLDS sweep of the San Francisco Giants and .231 with a pair of RBI in the World Series victory over the Cleveland Indians. Within a month of the championship, he was dealt back to the Royals for Blaine Mull in a tradition unlike any other, a first Marlins fire sale.

Limited to 93 games due to injuries, Conine hit .256 with 8 homers for the Royals in 1998. Prior to the next season, he was traded to the Baltimore Orioles for Chris Fussell. After four and a half years with the O's, during which he hit .311 in 139 games in 2001, he was reacquired by the Marlins on August 31, 2003, a few hours before the deadline to be eligible for postseason rosters, after third baseman Mike Lowell had his wrist broken by a hit-by-pitch earlier in the day. He played regularly in left field down the stretch, with rookie Miguel Cabrera moving to third base, and was one of Florida's best hitters in the postseason, batting .458 in the NLCS against the Chicago Cubs and .333 in the World Series against the New York Yankees. In 2004, he tied the Marlins record with three grand slams in a season.

Conine became a free agent following the 2005 season and returned to Baltimore to start 2006. In late August, he was traded to the Philadelphia Phillies, and after the season was dealt to the Cincinnati Reds. Late in the 2007 campaign, he was traded again, this time to the New York Mets. In 2008, Florida signed Conine to a one-day contract to allow him to retire as a Marlin. He was hired by the team late that year as a special assistant to the president, a position he lost when Derek Jeter bought the club and cleaned house. He also worked as a broadcaster for the team with Fox Sports Florida at times. He joined the staff of Florida International University as an assistant coach in 2022.

Conine became eligible for election to the Hall of Fame in 2013 but did not receive any votes and was dropped from the ballot. In 2014, he was inducted into Miami's Ride of Fame, with a double decker bus dedicated to him.

His son, Griffin Conine, was drafted by the Miami Marlins in the 2015 amateur draft, but went on to play at Duke University. He was drafted again in the 2nd round in 2018, by the Toronto Blue Jays, who had made it a bit of a specialty to develop second-generation players.

Away from the diamond, Conine and his wife are world-class racquetball players.