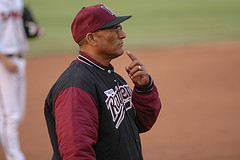 The brother of Jose Cruz and Hector Cruz and uncle of Jose Cruz Jr. and Jose E. Cruz, Tommy Cruz had cups of coffee in the majors with the St. Louis Cardinals in 1973 and the Chicago White Sox in 1977. He later played in Japan with the Nippon Ham Fighters from 1980 to 1985, hitting a total of 120 home runs while in Japan.

While with the Cardinals in 1973, his brothers Jose and Hector were his teammates. It was the first time since the three Alou brothers - Matty, Felipe and Jesus - had been teammates with the San Francisco Giants in 1963 that three brothers were on the same major league team; it has not happended since. In 1977 with the White Sox, there was also another Cruz on the team - Henry Cruz - but the two were not related.

In 1989, Cruz played for the Winter Haven Super Sox of the Senior Professional Baseball Association. He played in 17 games and batted .313.

In addition to his major league brothers and nephew, Tommy's sons, Cirilo Cruz and Alberto Cruz, played several seasons in the minors.