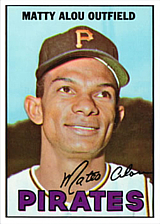 "Matty Alou, a left-handed slap-hitting outfielder who won a batting championship as a Pittsburgh Pirate, and . . . who played for six major league teams, was a prolific singles hitter. His .307 average over his 15-year career was higher than that of Willie Mays (.302) or Mickey Mantle (.298). His best years, 1966-69, were in an era dominated by pitching." - from Matty Alou's New York Times obituary, November 3, 2011

Part of one of the great baseball families of all-time, Matty Alou played fifteen seasons in the major leagues. He had a lifetime batting average of .307, earned during the second dead-ball era, and won the National League batting crown in 1966. 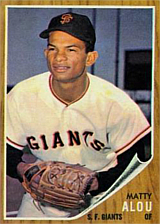 The younger brother of Felipe Alou and older brother of Jesus Alou, Matty Alou played alongside Juan Marichal and Manny Mota on the Dominican Air Force team as a 17-year-old. He then began his pro career in the New York Giants chain in 1957. After hitting .306 with 14 home runs for the Tacoma Giants in 1960, he earned a September call-up to the big league club, now in San Francisco, and became brother Felipe's teammate. He and his brother both homered in the same game on May 15th, 1961, facing the Chicago Cubs, and in the 1962 World Series, he went 4-for-12 as the Giants fell to the New York Yankees.

Alou struggled in 1963, hitting just .145, but was joined by brother Jesús on the San Francisco roster in September. On September 10, all three Alou brothers batted in the same inning, against New York Mets pitcher Carl Willey (who retired all three), and they played together in the outfield three times later in that month. Felipe was traded after that season, while Jesús took over as the club's regular right fielder.

Alou pitched just once in his major league career, in August 1965. He pitched two scoreless innings, striking Willie Stargell out twice. After that season, he was dealt to the Pittsburgh Pirates for Joe Gibbon and Ozzie Virgil, and he immediately blossomed as a hitter on manager Harry Walker's club (Alou's New York Times obituary gave credit to Walker and Roberto Clemente for convincing Alou to choke up and slap the ball to left field instead of trying to pull the ball). In his first year in a Pirates uniform, he led the National League with a .342 average as his brother Felipe came in second at .327, the only time in baseball history that brothers finished 1-2 for the batting title. He hit .338 in 1967 (third in the NL) and batted .332 in 1968 (second in the circuit). In 1969, he led the league with 231 hits and 41 doubles, while hitting .331.

Before the 1971 season, Alou was traded to the St. Louis Cardinals, and he hit .315 for the club that year. Midway through the following year, he was acquired by the Oakland Athletics, and he played a major role in that year's pennant drive. In that year's World Series against the Cincinnati Reds, he went just 1-for-24. He split the 1973 campaign between the Yankees and Cardinals and ended his big league career with the San Diego Padres in 1974.

After his major league days were over, Alou played three seasons for the Taiheiyo Club Lions in Nippon Pro Baseball, hitting .283 with 14 homers. He was a Detroit Tigers scout from 1987 to 1989 and managed the DSL Giants in 1992 and DSL Giants/Orioles in 1994.

In addition to his brothers, Alou was also the cousin of major leaguer José Sosa, the uncle of major leaguers Moises Alou and Mel Rojas, as well as minor leaguers Felipe Alou Jr., Jose Alou, and Francisco Rojas. His paternal surname is actually Rojas. Early in his playing career, Felipe was incorrectly called by their mother's name, Alou. The error went uncorrected, and when his brothers and sons began their pro careers, they used the Alou name as well.