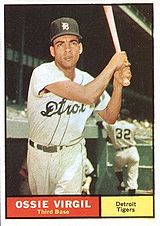 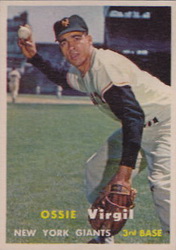 Ozzie Virgil was credited for breaking the color barrier for the Detroit Tigers in 1958, and had 5 hits in his first game as a Tiger. He used to be listed the very first of the hundreds of major leaguers who were born in the Dominican Republic but that honor was rescinded in 2020 when the Negro Leagues were retroactively given MLB status; Pedro San took over, having played in 1926. He emigrated to the United States at fourteen in 1947 and began playing baseball in the 1950s while with the United States Marine Corps. He was signed by the New York Giants to a contract in 1953. In addition to his major league career, he played 13 seasons (1953-1956, 1958-1960, 1962-1964 and 1966-1968) in the minor leagues, 10 of which were at AAA. He had three years with batting averages of over .300. Incredibly, the free-swinging Virgil walked only 34 times in nearly 800 career major league plate appearances.

During the winter months Virgil played with the Mayaguez Indians in the Puerto Rican League and with Águilas Cibaeñas and the Escogido Lions in the Dominican League, both of which he would later manage. He also managed the Cardenales de Lara, Leones del Caracas, Tiburones de La Guaira and Tigres de Aragua of the Venezuelan League and the Mazatlan Venados in the Mexican Pacific League.

He is the father of catcher Ozzie Virgil Jr.