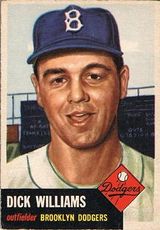 Dick Williams played thirteen seasons in the majors but is best remembered as a highly-respected and yet controversial manager. He won back-to-back World Series with the Oakland Athletics and led the Boston Red Sox and San Diego Padres to pennants. His 1,571 major league wins are 18th on the all-time list of wins by a manager (as of 2010), and he was elected to the Hall of Fame by the Veterans Committee late in 2007.

Signed by the Brooklyn Dodgers in 1947, Williams made his pro debut with the Santa Barbara Dodgers that summer. The next year, he hit .335 with 16 home runs for Santa Barbara and was named a California League All-Star. He reached the majors with Brooklyn in 1951 and appeared in three World Series games for the club in 1953, going 1-for-2 as the Dodgers fell to the New York Yankees in six games. The Baltimore Orioles acquired him off waivers during the 1956 campaign, and he hit 11 homers in 87 games for the O's that year.

Williams was traded to the Cleveland Indians during the 1957 season before being dealt back to Baltimore less than a year later. Following the 1958 season, he was sent to the Kansas City Athletics for Chico Carrasquel. As Kansas City's regular third baseman, he had his best season in 1959, hitting 33 doubles and 16 home runs and driving in 75 runs. He spent two years with the Athletics, where he was a teammate of future Hall of Fame skipper Whitey Herzog, before returning to the Orioles. He ended his big league career after two seasons in a Boston Red Sox uniform. Overall, in just over 1,000 games, Williams hit .260 with 70 homers while seeing action in the outfield, at third base, first base, and second base.

Following his playing days, Williams became skipper of the Toronto Maple Leafs, Boston's top farm team, in 1965. In each of two years in the helm of the club (1965 and 1966), he won the International League championship.

In 1967, a 37-year-old Williams took over as manager of the Red Sox, a club that had finished in ninth place in the American League the season prior. Under his leadership, Boston slugger Carl Yastrzemski won the Triple Crown, and the team captured the AL crown in a close and exciting pennant race. However, the Red Sox fell to the St. Louis Cardinals in the World Series in seven games. The club was unable to repeat the success in the next two years, and Williams was fired late in the 1969 campaign.

After spending 1970 on Gene Mauch's coaching staff with the Montreal Expos, Williams was hired by Charlie Finley to manage the Oakland Athletics in 1971. With stars including Reggie Jackson, Rollie Fingers, and Catfish Hunter, the team won the AL West in his first year and the World Series in his second. In a statistical quirk, between July 30 and August 12, 1973, his A's started a left-handed pitcher for 13 straight games; they went 8-5 for the stretch behind Ken Holtzman, Vida Blue, Paul Lindblad, and Darold Knowles. They went on to repeat as World Series champs that fall, but within days, Williams quit the team. He had clashed with Finley during the World Series, when the team owner had wanted to get rid of 2B Mike Andrews, after he had committed a couple of errors that cost the A's Game Two against the New York Mets in extra innings. Finley even forced Andrews to sign a statement claiming he was injured, in a bid to replace him on the roster with Manny Trillo; Commissioner Bowie Kuhn refused to endorse the move, and the clash was the last straw for Williams, who could no longer abide working for the fickle Charlie O.

Williams returned to the dugout midway through the 1974 season, replacing Bobby Winkles as manager of the California Angels. The club finished last in the AL West in his first two years at the helm, and he was replaced by Norm Sherry during the 1976 season. He moved on to lead the Expos beginning in 1977. The club was sub-.500 in his first two years, but with young stars including Gary Carter and Andre Dawson, Montreal was soon contending. In 1979 and 1980, the team fell just short of playing in the postseason, losing out to the eventual World Series champions - the Pittsburgh Pirates the first year and the Philadelphia Phillies the second - on the season's last week-end both years. However, Williams was again involved in controversy: in particular his decision to use ace pitcher Steve Rogers as a pinch-runner during the 1981 pennant race. Rogers was injured trying to break up a double play and had to miss two weeks of action; Williams was fired a few days later and replaced by Jim Fanning. Ironically, the Expos made the only playoff appearance in franchise history that fall, with the team Williams had put together.

Williams moved on to the San Diego Padres in 1982, and the team finished .500 in his first two years. In 1984, with a lineup that included youngster Tony Gwynn and veteran Steve Garvey, his club went on to win the National League pennant in a thrilling NLCS against the Chicago Cubs, but fell to the Detroit Tigers in the World Series. After his time in San Diego, he spent parts of three summers as skipper of the Seattle Mariners, but the squad never topped .500 during his tenure at the helm.

In 1989, Williams became manager of the West Palm Beach Tropics of the Senior Professional Baseball Association.

Williams was voted into the Hall of Fame by the Veterans Committee in 2007 and was inducted in 2008.

Williams' son, Rick Williams, never reached the majors as a player but was a big league coach.

Williams died of an apparent heart attack in a hospital near his home in Henderson, Nevada on July 7, 2011 at age 82. 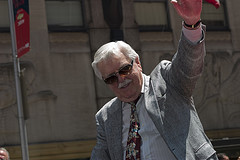