Inducted into Hall of Fame in 2010

"Baseball has been good to me since I quit trying to play it." - Whitey Herzog

Although Whitey Herzog had an eight-year career as a major league player, he is much better known for the 19 years that he managed in the major leagues. He missed being elected to the Hall of Fame in 2007 by the Veterans Committee by only one vote, and was elected in 2009.

In the minors, Herzog missed the 1953 and 1954 seasons while serving in the military. His minor league career spanned six seasons, and he hit .291.

Herzog was an outfielder who broke in with the Washington Senators in 1956, hitting only .245 but getting 7 triples. He stole 8 bases, and undoubtedly could have stolen more but base-stealing was not then in fashion (the league leader, Luis Aparicio, had 21). He was eventually relegated to back-up duties, and then sold to another perennial doormat team, the Kansas City Athletics, in the days when Roger Maris was an outfielder there. Herzog hit a personal-best .293 in 1959. In 1960, he had a chance to compare notes with another future manager on the team, Dick Williams.

He was traded to the Baltimore Orioles in 1961, and was able to get 323 at-bats, hitting .291 on a team that finished third in the league. Dick Williams also moved to the Orioles in a separate trade. Herzog was the third outfielder on the team, while Williams was the # 5 outfielder. In 1962, though, Herzog hit a bit lower, .266, and was relegated to being a back-up outfielder, while the Orioles finished 7th. He finished out his career in 1963 with the Detroit Tigers. 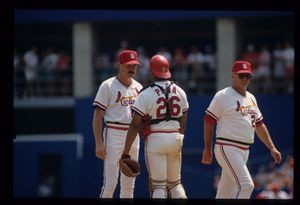 Whitey was successful as a manager both with the Kansas City Royals of the 1970s and the St. Louis Cardinals of the 1980s. His teams had six division championships, three pennants and one World Series title. His top player with Kansas City was George Brett and his best-known players with St. Louis were probably Ozzie Smith and Willie McGee.

In addition to managing the Texas Rangers, California Angels, Kansas City Royals and St. Louis Cardinals, Whitey Herzog was General Manager of the Cardinals from 1980 to 1982 and of the Angels in 1993 and 1994.

Herzog was elected to the Baseball Hall of Fame on December 7, 2009 in a vote of the Veterans Committee for managers and umpires. His induction took place the following July.

His grandson, John Urick, played in the minor and independent leagues from 2003 to 2010 and then became a minor league coach.

"Great manager - he was a player's manager. Whitey surrounded himself with good baseball people . . ." - pitcher Bill Gogolewski about Herzog's first year as a big league manager