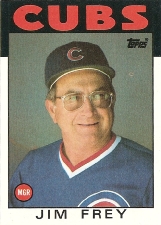 Jim Frey was a minor league player and then a manager in the big leagues for six seasons, followed by a number of seasons as a baseball executive.

Frey spent 1964 and 1965 as skipper of the Bluefield Orioles and 1966 to 1969 as a Baltimore Orioles scout before serving as a Oriole coach under Earl Weaver from 1970 to 1979. In 1980, he became manager of the Kansas City Royals and led the team to their first World Series appearance that first year, losing in 6 games to the Philadelphia Phillies. However, the club struggled in 1981, going 30-40 under Frey, and he was replaced by Dick Howser. At the time, he was criticized for his lack of strategic acumen, which was exemplified by his work in the 1981 All-Star Game: he used all his substitutes early in the game, and was forced to let P Dave Stieb bat in the 9th inning with the game on the line when he had run out of potential pinch-hitters.

He was a member of the New York Mets coaching staff in 1982 and 1983 before becoming skipper of the Chicago Cubs from 1984 to 1986. In his first season with the Cubs, he led the team to their first postseason appearance since 1945, but they blew a two-game-to-none lead in the NLCS against the San Diego Padres and failed to advance to the World Series. He returned to the club as General Manager in late 1987 and held that post until 1991, being part of the next Cubs post-season team, in 1989.

After leaving the major leagues, he worked to set up the Somerset Patriots of the independent Atlantic League and remained associated with the team until his passing in 2020 at 88.