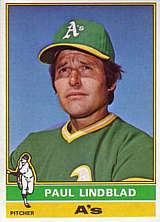 On the final day of the 1975 season, relief pitcher Paul Lindblad of the Oakland Athletics combined with Vida Blue, Glenn Abbott, and Rollie Fingers to throw a no-hitter against the California Angels. A key bullpen cog in the A's march to the 1973 and 1974 world championships, Paul became the last man to face the great Willie Mays in a game. During Game 3 of the 1973 Fall Classic, Paul induced a groundout out of the "Say Hey Kid", who was appearing as a pinch hitter.

After his big league career, Lindblad was the pitching coach for the El Paso Diablos in 1987-1991, Peninsula Pilots in 1992, and Appleton Foxes in 1993. His brother, Eddie Lindblad, pitched in the minors for the New York Mets.

Paul died on New Year's Day 2006 after suffering from Alzheimer's disease for over a decade.