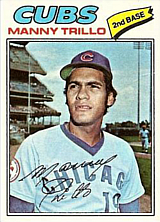 Signed as a teenager by the Philadelphia Phillies, Manny Trillo was drafted by the Oakland Athletics organization in the minor league phase of the 1969 Rule V Draft. A light hitter, but a terror with the glove at second base, Trillo spent seven years largely in the minors before being part of the price for Hall of Famer Billy Williams when Oakland acquired Williams from the Chicago Cubs after the 1974 season. Four years later, the Cubs shipped Trillo to Philadelphia in a large deal.

Trillo had his best years at the plate for the Phillies, forming part of a veteran infield that helped Philadelphia to its first World Championship in 1980. He won the MVP award in the 1980 NLCS with clutch hitting. Even though he rapidly declined as a hitter thereafter, Trillo stuck around as a defensive specialist with many clubs for many years. 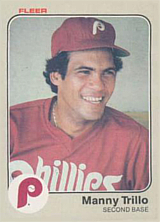 Trillo won three Gold Gloves with Philadelphia. He was a crisp fielder, compiling a long errorless streak in 1982. He was rangy enough at second base and had strong instincts on line drives and hard grounders, but was best known for having perhaps the strongest throwing arm of any second baseman in the history of the game. Unless a second baseman draws unwanted attention to his arm (see Steve Sax or Chuck Knoblauch), its throwing strength is perhaps of minor importance, but Trillo was amazing to watch. He would gather in a ground ball, seem to study it momentarily, and then sort of push it with his forearm toward first base; the resulting throw would get to first with uncanny speed and accuracy.

Trillo was a key part of Charlie Finley's inability to make wise decisions in the push to the Oakland A's 1973 world championship. When Charlie foolishly sold José Morales to the Montreal Expos that September, coupled with an injury to Bill North before the postseason, the A's petition to activate Trillo and Allan Lewis for the ALCS was approved by the Baltimore Orioles. Not satisfied yet, Charlie O. pressured Mike Andrews to sign a notice that he was injured following a tough Game 2 of the '73 Fall Classic against the New York Mets, in an effort to activate the slick-fielding Trillo in his place. Commissioner Bowie Kuhn denied this request and forced Finley to reinstate Andrews in time for Game 4.

After his playing career, Trillo was a minor league coach in the Cubs, Phillies, New York Yankees, and Milwaukee Brewers organizations. In 2010 and 2011, he was a baserunning instructor in the Chicago White Sox farm system.

He was elected to the Latino Baseball Hall of Fame as part of its 2012 class.