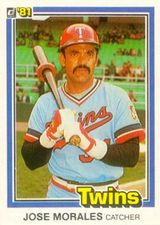 The seventh man from the U.S. Virgin Islands to make the majors, Jose Morales was a catcher by trade but best remembered as a master pinch-hitter. In 1976, playing for the Montreal Expos, he set a record for most pinch-hits in a season with 25 (later broken by John Vander Wal of the Colorado Rockies, with 28 in 1995).

After his playing career, he became a respected hitting coach in the majors. His nephews are Melvin Nieves and Wil Nieves.