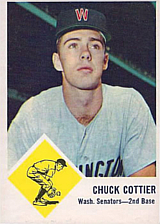 Chuck Cottier was primarily a second baseman in nine seasons in the majors. He later managed the Seattle Mariners for parts of three seasons.