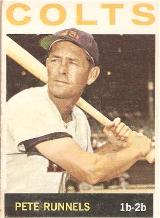 He had played semi pro baseball and also played in the service and began in Organized Baseball at age 21 in 1949 with Chickasha, OK in the Class D Sooner State League. He married Betty Ruth Hinton on October 20, 1949. He was with Texarkana, TX in the Class B Big State League the following year. Scouted by Horace Milan and Joe Cambria, he was purchased by the Washington Senators from Texarkana for $12,500 and optioned to the Chattanooga Lookouts of the Southern Association for the first half of the 1951 season.

On August 30, 1960, Runnels collected six hits in the first game of a doubleheader against the Detroit Tigers, including the game-winning double in the 15th inning. In the second game of the twinbill, Runnels banged out three more hits, tying a major league record for hits (nine) in a doubleheader. He hit a pinch home run in the 3rd inning of the All-Star Game on July 30, 1962

He returned to Boston as a coach for the Red Sox two years (1965-1966), and on September 8th of the second year the Red Sox fired manager Billy Herman, who was 64-82, and named Runnels as interim pilot. He managed them for the last 16 games of the year, ending his baseball career at age 40 on September 30th.

His grandson, Jonathan Runnels, was drafted by the Toronto Blue Jays in the 29th round of the 2007 amateur draft.

A bright light on otherwise dismal teams, although his seven seasons in Washington's spacious Griffith Stadium masked the fact, Runnels was a fine hitter his whole career. When he got to the Red Sox in 1958, he was helped by advice from Ted Williams and others, who told him to just slap the ball into the holes. He learned how to slice line drives off the Green Monster in Fenway Park.

Runnels won two batting titles for the Red Sox and came close to a third. One of the few things for Red Sox Nation to cheer for in the early 1960s, sweet-swinging Pete lost the 1958 American League Batting Crown to Williams on the final day of the season when he went hitless against the Senators while Williams went 2-for-4.

Runnels later won the 1960 and 1962 titles, capping a great run with Boston, for whom he hit .320 in five seasons. Runnels began his career as a shortstop with the Senators in 1951, but the batting titles he later won made people forget that he had a fine glove. A versatile player, Runnels played more than 400 games at first base, second base and shortstop.

A master at handling the bat, he was a notorious singles hitter who had one of the best eyes in the game, compiling an outstanding 1.35 walk-to-strikeout ratio (844-to-627). Altogether he batted over .300 six times, once with the Senators, five with the Red Sox. In five seasons with Boston, Runnels never hit less than .314.

A true sportsman and gentleman, he won the Comeback Player of the Year award in 1958 when his batting average went from .230 to .322, but never received a single vote for the Hall of Fame.

He played in three All-Star Games for the American League (1959, 1960 and 1962) and was 1 for 7 with a home run. Billy Goodman is a very good comparison in many ways: he also won a batting title, he didn't play one position for that long and he played for the Red Sox. But Runnels was a far better defensive player than Goodman ever was, at least for his first few years, but his range deteriorated severely. Also, Gregg Jefferies was eerily similar. Like Jefferies, Runnels was a great bat who couldn't find a spot to play defensively. His teams tried to hide him here and there, anything to get his stick in the lineup. Runnels was inducted to the Boston Red Sox Hall of Fame in November 2004.

He owned and operated a sporting goods store in Pasadena, TX. He later founded Highland Lakes Athletic Association and operated Camp Champions, a coed summer camp in Marble Falls, TX. He had blond hair and green eyes, his ancestry was Scotch-Irish and his principal hobbies were hunting and fishing. He died at age 63 at Bayshore Hospital in Pasadena from a heart attack on May 20, 1991, having suffered from a stroke three days before, and is buried at Forest Park East Cemetery in Houston.