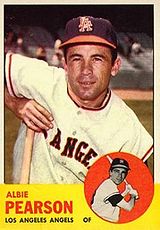 Diminutive outfielder Albie Pearson was the American League Rookie of the Year with the Washington Senators in 1958 despite being one of the shortest men in baseball history. Chronic back problems, which eventually shortened his career, quickly put him back in the minors and enabled the Los Angeles Angels to choose him as one of their expansion draft picks.

The first player to ever bat for the major league Angels in 1961, Pearson was a fixture in center field for several seasons. His best year was 1963 when he batted .304 and made the All-Star team. His back problems resurfaced in 1964, however, and two years later he was out of baseball at age 31.

His career highlights include a very respectable lifetime .270 batting average and a sterling on-base-percentage of nearly 37 percent.

Pearson has had a somewhat colorful post-baseball career, working at various times as a disc jockey and minister.