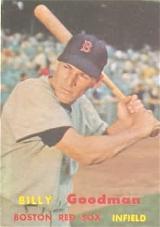 Billy Goodman was an outstanding hitter who won a batting title, hit .300 in a long career in the majors, and finished with a sterling on-base-percentage of nearly .380. He hit .300 or better in 5 seasons during which he had over 400 at-bats.

He was an 18-year-old when he played his first year of pro baseball with the Atlanta Crackers in 1944. His first season was a memorable one as the young outfielder led the Southern Association in runs scored with 122 and triples with 13. Billy also was near the leaders with a .336 batting average.

The United States Military called in 1945 and Bill spent that year with the Navy in the South Pacific helping finish up World War II. He got back in time in 1946 to appear in 86 outings, again with the Atlanta Crackers, hitting at a .389 pace with 129 hits in 332 at-bats. This got Goodman a long-time home, as the Atlanta club sent him to the Boston Red Sox before the 1947 season.

One of the most versatile players of the era, Billy played all over the infield and outfield in a 16-year career between 1947 and 1962. Originally a regular first baseman with the Red Sox in 1948 and 1949, he hit just one home run in the two seasons, a grand slam on July 29, 1948, for the first of just 19 career homers.

But Goodman, an excellent left-handed contact hitter with a keen eye at the plate with virtually no power, was a man without a position in 1950 when rookie Walt Dropo took over at first base. He moved to left field for the second half of the season when Ted Williams fractured his elbow in the All-Star Game, and proceeded to finish the year with a .354 average to win the American League batting title. Billy then moved back into the infield at second base for a few years following the retirement of Bobby Doerr. A consistent .290s to low .300s hitter, he never homered in four of his seasons in which he had over 400 plate appearances, but had five-hit games five times in his career.

Goodman was with the Baltimore Orioles, Chicago White Sox and expansion Houston Colt 45s at the end of his big league days, and shared third base with Bubba Phillips for the pennant-winning White Sox in 1959. Defensively he was in over 600 games at second base, 400-plus at first base, over 300 at third base and 100 more in the outfield along with a handful at shortstop.