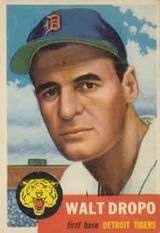 First baseman Walt Dropo had one terrific year (1950) that won him the American League Rookie of the Year Award but never again duplicated that level of success. He played 13 years in the big leagues, hitting 152 home runs with a .270 batting average. He still shares the major league record for the most consecutive hits.

Dropo was a three-sport athlete at the University of Connecticut, and was drafted by the Chicago Bears of the NFL in 1946 and the Providence Steam Rollers of the BAA (precursor of the NBA) in 1947 before signing with the Boston Red Sox on June 17, 1947.

After reaching the majors in 1949 with a lackluster .146 batting average in 11 games, he became the team's regular first baseman the next summer, putting up huge numbers in his rookie campaign. That year, he hit .322 with 34 home runs, drove in 144 runs to tie teammate Vern Stephens for the American League lead. He started in the All-Star Game and beat out the fabled Whitey Ford for the Rookie of the Year Award. However, in 1951 the so-called "sophomore jinx" struck and Dropo batted just .237 with only 11 homers.

In June 1952, he was traded to the Detroit Tigers as part of a nine-player deal which sent Tigers Hall of Famer George Kell to the Red Sox. The next month, he earned a spot in the record books by getting hits in 12 consecutive at-bats over the course of three games on July 14th and July 15th. He ended the year with a .276 average, 29 home runs and 97 RBIs.