Known for his outstanding defense, Johnny Kling played more than a decade with the Chicago Cubs and is widely regarded as one of the best catchers of the first decade of the 20th Century. 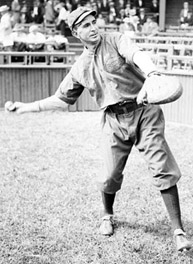 The younger brother of pitcher Bill Kling, Johnny began his career as a pitcher in semi-pro ball. By the time he was discovered by the Cubs, he had been converted to catcher. He reached the majors in 1900 and the next season, he split playing time behind the plate with Mike Kahoe. He became the team's primary backstop in 1902 and had his best season in 1906, hitting .312 as the Cubs reached the World Series. From August 24-28, 1902, he collected 12 consecutive base hits.

The Cubs returned to the World Series the next two seasons, helped by Kling's strong arm. In the 1907 Series, Kling threw out 7 of 14 Detroit Tigers who were trying to steal bases as the Cubs won their first of two straight championships.

Prior to the 1909 season, Kling won the world billiards championship and left baseball to play professionally. He owned a billiards parlor in Cincinnati, OH and also had received feelers to become manager of the Cincinnati Reds, but the Cubs refused his request to be traded to the Reds, so he sat out the season instead. However, after failing to defend his billiards crown, he returned to the Cubs in 1910, once again leading the team to the World Series.

Kling was traded to the Boston Braves in 1911 and managed the team to a last-place finish, while hitting .317, in 1912. He was traded to the Cincinnati Reds in 1913 and spent his last big league season there under his former teammate, skipper Joe Tinker.

Kling was highlighted in Heroes Behind the Mask as one of the top catchers of all-time. He umpired one National League game in 1901. 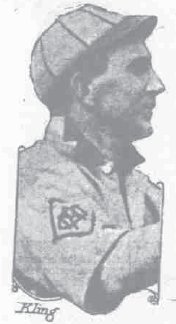 After leaving baseball, he became a professional billiard player. He played for Kansas City in the Interstate Billard League and was "one of the sensations of the early contests". Since his retirement from baseball he "devoted his time to billiards, improving his game until he promises to become one of the leading shortstops of the billiard world", according to an article published in 1914, see [1].

In later life, Kling owned the Kansas City Blues of the American Association from 1933 to 1937, ran a hotel, and was a partner in both a billiard parlor and a bowling alley. He died of a cerebral hemorrhage at age 71.