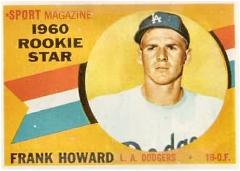 Frank Howard was the winner of the 1960 National League Rookie of the Year Award with the Los Angeles Dodgers before a mid-career trade saw him become the best and most popular player for the expansion Washington Senators. His four-year home run duel with perennial champ Harmon Killebrew between 1967 and 1970 earned him the nickname The Capital Punisher.

At 6'7" and 255 lbs., he was arguably the biggest player of his era. A former basketball player at Ohio State University, he spent most of his big league career as an outfielder. He went to Ohio State at the same time as Galen Cisco, but Cisco was a football player in addition to baseball, whereas Frank played basketball. 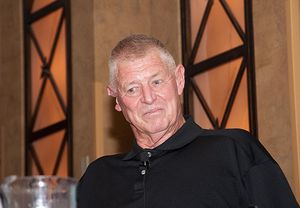 Howard speaks at a SABR meeting in 2009

An all-or-nothing slugger with prodigious power but limited speed, he was generally in the mold of contemporaries Harmon Killebrew and Willie Stargell, but his career falls well short of those two Hall of Famers. Between 1967 and 1970 though, Howard found his long ball stroke and engaged in a shoot-out with Killebrew for the American League home run lead, Killebrew winning in 1967 with 44, Howard with 44 in 1968, Killebrew again with 49 in 1969 (besting Howard's career best 48), and Howard again with 44 in 1970.

During his career he hit a total of 17 round-trippers of Hall of Famers Whitey Ford, Bob Gibson, Catfish Hunter, Juan Marichal, Jim Palmer, Gaylord Perry, Robin Roberts, Warren Spahn and Hoyt Wilhelm. He led the American League in RBI once and was a four-time All-Star.

While not remembered as hitting for average, Howard hit .296 three separate times in his career, impressive numbers when batting titles were being won as low as Carl Yastrzemski's .301 in 1968. He finished in the top ten in the league in batting average four separate times. His combination of a big power and a respectable batting average during baseball's second deadball era gave him a notable career OPS+ of 142, tied for #62 on the all-time list a single tick behind contemporaries Killebrew and Hall of Famer Eddie Mathews. As of mid-2016 that's tied with modern slugger Mike Piazza, and a tick ahead of Alex Rodriguez and future Cooperstowner Chipper Jones. Howard's complete lack of speed, propensity to strike out at alarming levels when it was still frowned upon, and balkiness on defense all worked against enshrinement, which explains his poor showing in his sole appearance on the BBWAA Hall of Fame ballot.

After being released by the Detroit Tigers in 1973 Howard attempted to continue his playing career with the Taiheiyo Club Lions in 1974 but injured his knee just before the season opener. He retired after only one game.

After his playing career, he became a minor league manager, and eventually was given a chance to manage in the majors, but both of the teams he led, the San Diego Padres in 1981 and the New York Mets in 1983, were in a rebuilding mode. He always did have a reputation of being able to relate to young players and help them improve, and indeed, his two teams both made it to the World Series within three years of departure, on the strength of their young talent.

Based on the "similarity scores" method, the most similar players to Howard are Rocky Colavito, Joe Adcock, and Norm Cash.