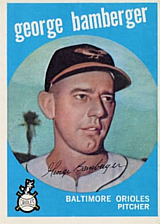 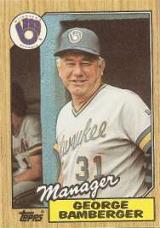 “When you come right down to it, there is no excuse for walking a batter... It’s accepted as normal, but it isn’t normal; it’s a mistake. If you throw four bad pitches, you have made four mistakes. There is no other sport where you can survive making that many mistakes.” - George Bamberger, to Denny Boyd of the Vancouver Sun, April 21, 1980

After serving in the army in World War II, pitcher George Bamberger went on to win 213 games in the minors, only appearing in ten big league games with the New York Giants and Baltimore Orioles. From July 10 to August 14, 1958, Bamberger pitched 68 2/3 innings without issuing a walk.

Bamberger was a player/coach for the Vancouver Mounties (1960-1962) and Dallas-Fort Worth Rangers (1963) and an Orioles minor league pitching instructor (1964-1967). He gained his greatest fame as the Orioles pitching coach from 1968 to 1977. During his tenure, the O's produced four Cy Young Award winners and 18 twenty-game winners. In 1978, he left the O's to become the Milwaukee Brewers' manager, leading the club to their first winning season that year. He suffered a heart attack during spring training 1980 and retired as skipper after the season, but Bamberger returned to baseball in 1982 as the manager of the New York Mets. He served another stint as Brewers manager from 1985 to 1986.

Bamberger's first tenure of service in Milwaukee coincided with the emergence of the Brewers as serious contenders. Although Bamberger had gained fame in Baltimore as an outstanding pitching coach, the Brewers teams he managed were built around power. Bamberger managed such players as Hall of Famers Robin Yount and Paul Molitor, and other leading hitters of the day such as home-run champion Gorman Thomas, Cecil Cooper and Ben Oglivie. The 1978-1980 team acquired the nickname "Bambi's Bombers," in honor of the manager who led them.