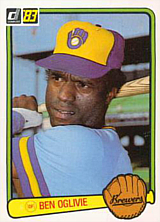 Ben Oglivie, the 1980 American League home run champion, had a 16-year major league career with three teams. The bulk of his career was spent with the Milwaukee Brewers, and he was part of the 1982 Brew Crew that went to the 1982 World Series. He was born in Colon, Panama, as was his contemporary Manny Sanguillen.

Oglivie broke into the majors at age 22 with the Boston Red Sox in 1971, a team that had Carl Yastrzemski and Reggie Smith playing two of the three outfield positions. Other youngsters on the team who looked for playing time included Carlton Fisk, age 23, and Cecil Cooper, age 21. After three years with the Red Sox, Oglivie began to get more playing time when he was traded to the Detroit Tigers for Dick McAuliffe before the 1974 season. As he aged into his late 20s, he started to show more power.

After 1977 he was traded again, to the Milwaukee Brewers, where he would spend the rest of his major league career. He slugged over .500 in both 1979 and 1980, but it was in 1982, when he hit 34 home runs and made a diving, rally-killing 8th-inning catch in game 162, that his Brewers went to the 1982 World Series. After his final season in Milwaukee in 1986, he spent two seasons in Japan with the Kintetsu Buffaloes, hitting well. In 1989, Oglivie played for the Winter Haven Super Sox of the Senior Professional Baseball Association.

His 235 lifetime home runs put him (as of 2019) at 266th on the all-time list, tied with Bill Nicholson, Johnny Damon and Dan Uggla, and one homer ahead of Carlos Gonzalez, Gary Matthews, Paul Molitor and Kevin Mitchell.

Following his playing career, the Milwaukee Brewers hired Oglivie on July 27, 1989 to be a minor league instructor & special assignment scout. He stayed in that job through the 1990 season before transitioning to a combined advance scout & professional scout role for 1991. Oglivie began his on-field coaching career as the hitting coach for the AZL Brewers in 1992 and the El Paso Diablos in 1993. The Pittsburgh Pirates hired Oglivie in 1994 for their roving minor league hitting instructor position. He then spent 1995-1997 as the Calgary Cannons hitting coach. He served as the hitting coach for the GCL Pirates in 1998 and the Hickory Crawdads in 1999.

The San Diego Padres hired Oglivie in late 1999 to be their minor league hitting coordinator. He only stayed in that job for about six weeks before the Padres named him their hitting coach for 2000. This appointment did not work well and the Padres demoted him to the AZL Padres on May 30, 2000. Oglivie spent 2001-2002 as the hitting coach for the Idaho Falls Padres and 2003-2005 with the Eugene Emeralds.

He was elected to the Latino Baseball Hall of Fame as part of its 2012 class.