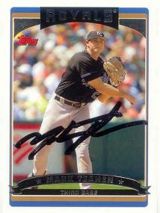 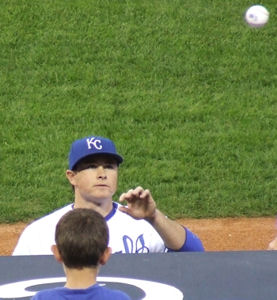 After graduating from Yucaipa High School in 1999, Mark Teahen attended St. Mary's College of California, where he was selected All-West Coast Conference in his final year. He was then chosen by the Oakland Athletics with the 39th overall pick of the 2002 amateur draft. He was signed by scout Will Schock and made his pro debut that summer.

Teahen was acquired by the Kansas City Royals on June 24, 2004 with Mike Wood in exchange for Octavio Dotel and cash; the deal completed the three-way trade with the Houston Astros that involved Carlos Beltran going to the Astros (the Royals also acquired catcher John Buck in this deal).

Teahen became the Royals' starting third baseman on Opening Day 2005 and was named the Royals Player of the Year in 2006. He was moved to the outfield to make room for rookie Alex Gordon in 2007. He was the Royals' Opening Day starter in right field in 2007, in left in 2008, and second base in 2009. He was only the seventh player since 1956 to start four consecutive openers at a different position.

On November 16, 2009, Teahen has traded to the Chicago White Sox for Chris Getz and Josh Fields. He missed a good part of the 2010 season with injuries, then was traded to the Toronto Blue Jays on July 27, 2011 along with Edwin Jackson in return for Jason Frasor and Zach Stewart.

While born and raised in the United States, Teahen also holds Canadian citizenship and in 2009, Team Canada added him to its roster for the 2009 World Baseball Classic as the team's starting third baseman. Mark's father Mike Teahen was Canadian and had also played for Team Canada, while Mark's brother Matt Teahen also played pro baseball briefly.