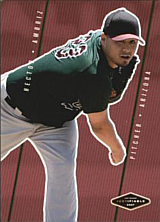 Hector Ambriz made his MLB debut in 2010.

Ambriz was named the Orange League MVP his last three years of high school. He was 10-1 with a 0.74 ERA and 131 strikeouts as a senior while batting .390. The Chicago White Sox took him in the 28th round of the 2002 amateur draft but he continued on to college.

With the 2007 Visalia Oaks, Ambriz had a 10-8, 4.08 record, allowing a .241 average. He finished sixth in the high-scoring California League in ERA and he was 4th in strikeouts.

The Cleveland Indians chose Ambriz in the 2009 Rule V Draft that winter. In his MLB debut, he pitched the 8th inning of a 9-3 loss to the Twins. Relieving Jamey Wright, he retired Delmon Young and J.J. Hardy. Brendan Harris singled, then Denard Span grounded out. Jensen Lewis replaced him on the hill in the ninth.