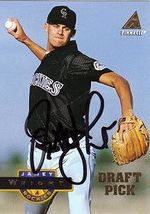 Jamey Wright was originally drafted out of high school by the Colorado Rockies in the first round (28th overall) of the 1993 Amateur Draft. He made his major league debut with the Rockies in 1996. Beginning his career as a starter, he bounced from organization to organization and between AAA and the majors for most of his career and moved to the bullpen in 2005 during his second stint in Colorado.

The first season he had an ERA under 4 was 2007, when he pitched 20 games (nine starts) with the Texas Rangers; he went 4-5 with a 3.62 ERA that season; his final career start also came that season.

Wright earned his first major league save in his 500th career appearance on July 5, 2011 while with the Seattle Mariners. It took him until his 18th major league season to pitch in the postseason. He finally made it with the Tampa Bay Rays in 2013, when he was used twice in relief against the Boston Red Sox in the Division Series; unfortunately, he gave up 4 hits and 3 walks in 2 innings, letting 4 runs score for an ERA of 18.00. He then spent the 2014 season as a reliever with the Los Angeles Dodgers, going 5-4, 4.35 in 61 games. He recorded his second career save and also made the final start of his career in his penultimate appearance, on September 21st when he pitched a couple of innings against the Chicago Cubs. The Dodgers won a division title but Jamey was not used in the postseason. He sat out the 2015 season after being cut by the Texas Rangers at the end of spring training, then tried a comeback with the Dodgers in 2016, at the age of 41. However, he was hit hard, to the tune of a 12.15 ERA in the Cactus League and seeing the writing on the wall, he announced his retirement on March 28th.

Wright worked as a player agent until being hired by the Los Angeles Dodgers in February 2020. He was pitching coach of the Oklahoma City Dodgers in 2021.