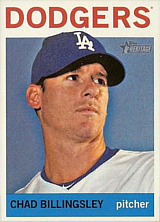 Pitcher Chad Billingsley was selected by the Los Angeles Dodgers in the first round of the 2003 amateur draft. He was signed by scout Marty Lamb for a $1.375 million bonus and made his pro debut that summer.

After being named the Dodgers' Minor League Pitcher of the Year in 2004 and 2005, Billingsley made his big league debut in 2006. He went 7-4, 3.80 in 18 games that first season, and also pitched a couple of scoreless innings in relief against the New York Mets in the NLDS. He confirmed his promise with a 12-5 mark and a 3.31 ERA in 2007. He began the season in the bullpen, but moved to the starting rotation where he was solid, making 20 starts in his 43 appearances. He continued to excel in 2008, his first season as a full-time starter in the majors. He went 16-10 in 35 games, pitching 200 2/3 innings with a 3.14 ERA and 201 strikeouts. Now considered the Dodger ace, he beat the Chicago Cubs handily in Game 2 of the NLDS, 10-3, but had a brutal outing in Game 2 of the NLCS against the Philadelphia Phillies. Not only did he give up 8 runs in 2 1/3 innings, but he failed to retaliate when his mound opponent, Brett Myers, threw at Russell Martin and Manny Ramirez. He went on to lose his follow up start in Game 5, and the Dodgers were eliminated in 6 games.

Billingsley made the All-Star team in 2009, on the basis of a solid first half and his previous season, but he ended the year with a poor record of 12-11, 4.03. In the postseason, he was used only once, in mop-up relief of an 11-0 loss to the Phillies in Game 3 of the NLCS. Another young pitcher on the Dodgers, Clayton Kershaw, was now usurping him as team ace, and Chad faded somewhat into the background. He maintained his spot in the starting rotation because of his ability to throw a good number of innings, even if his results were only so-so. In 2010, he was 12-11, 3.57 in 31 games, and in 2011, when Kershaw won the Cy Young Award, Chad was 11-11 with a 4.21 ERA. Chad began the 2012 season in a funk, with a record of only 3-9, 4.30 over 18 first-half starts. This was particularly damning as the Dodgers were in a tight race with the San Francisco Giants for top spot in the NL West. In the second half, he reeled off wins in his first 6 starts, capped with 7 shutout innings over the Atlanta Braves on August 19th, to bring his record to 10-9, 3.44, and the Dodgers back in first place for the time being. But he experienced pain in his elbow in his next start, forcing him to leave a game against the Miami Marlins with a 6-3 lead in the 4th inning on August 24th. The Dodgers described his injury as "inflammation", but were clearly concerned that it could be season-ending. He underwent a platelet-rich plasma injection, the procedure that had revitalized the career of Bartolo Colon, in the hope that he could return to the mound before the end of the season, but alas, it did not work. Chad did not pitch again that year, and the Giants pulled away to win the division title handily, and eventually record a second World Championship in three years.

Billingsley was back on the mound at the start of the 2013 season and pitched well in his first two starts, picking up a win and putting up an ERA of 3.00 over 12 innings. After a week of rest prompted by concern over discomfort in his elbow, he was scheduled to pitch again on April 21st, but instead was placed on the disabled list. The news turned worse, as he was diagnosed with a ligament tear and had to undergo Tommy John surgery, putting him out for the year. He was the fourth Dodgers starter to go down to an injury in three weeks, following Ted Lilly, Zack Greinke and Chris Capuano. He missed all of 2014 as well, became a free agent, and signed with the Philadelphia Phillies on January 29, 2015. He made his return to the majors on May 5th, losing a start to the Atlanta Braves, 9-0, then went back to the disabled list because of a strained right shoulder after two more appearances. After a no-decision against the Milwaukee Brewers on July 2nd, he won for the first time in over two years on July 7th, when, in his first ever start against the Dodgers, he allowed 2 runs in 6 innings to earn a 7-2 victory. He made his final big league appearance on July 18th and became a free agent at season's end, not to return.

In 2018, Chad became head coach for the baseball team at Conrad Weiser High School in Pennsylvania.