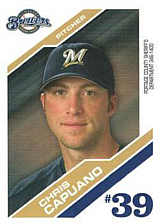 Chris Capuano was a tall drink of water who won 18 games in 2005 and made the National League All-Star team in 2006.

Originally property of the Arizona Diamondbacks, Chris was part of a hefty return (including and not limited to Lyle Overbay and Craig Counsell) that headed to the Milwaukee Brewers in exchange for the big bat of Richie Sexson after the 2003 season. Chris had made his initial big league appearances that past May, going 2-4, 4.64 in 9 games with the Snakes, then chipped in a 6-8, 4.99 record in 17 starts as a Brewer in 2004. His big year came in 2005, when he posted an 18-12, 3.99 record with 176 strikeouts in a league-leading 35 starts (219 innings). The 18 victories, fourth best in the National League, were enough to build some good momentum and earn him an All-Star bid in 2006. The season was not quite as impressive from a record standpoint, as he finished 11-12, but his ERA (4.03 vs. 3.99), strikeouts (172 vs. 176) and innings pitched (221 1/3 innings vs. 219) were all in line with 2005. Plus, he pitched two of his career shutouts, tossing a five-hitter against the Chicago Cubs at Wrigley Field on April 30th, blanking the Cubbies again at Miller Park with a six-hitter on July 6th.

Capuano started similarly strong in 2007. He was 5-0 with a 2.31 ERA and 31 strikeouts after his first seven starts. He was promptly swept up in a losing streak from hell, dropping 12 consecutive decisions between May 13th and August 30th and all 22 remaining games Capuano would pitch that season. From that high water mark of 5-0, 2.31, Chris finished an ugly 5-12, 5.10, but with 132 strikeouts in 150 innings. A Tommy John surgery veteran in 2002, Cap underwent the procedure again in 2008, subsequently missing each of the next two seasons. In 2010, he split his return outings between the bullpen and starting rotation, taking the bump 24 times with 9 starts. In his second start, he won his first game in more than three years, beating the Pittsburgh Pirates on July 19th while allowing one skinny earned run in 5 innings of work at PNC Park. For the season, he was 4-4, 3.95 in 66 innings. As a free agent, he agreed to a deal with the New York Mets, emerging as one of their most dependable starters in an otherwise miserable 2011 season for the club. Chris was 11-12, 4.55 in 33 starts, tossing his final career shutout with a two-hit, 13 strikeout gem against the Atlanta Braves on August 26th at Citi Field.

Free again, Chris joined the Los Angeles Dodgers before 2012 and started hot, going 7-1 with a 2.14 ERA in his first 10 starts. He ultimately cooled, finishing a strong 12-12, 3.72 in an NL-best 33 starts. He tossed 198 1/3 innings, his most since his two finest seasons with Milwaukee. He was unable to retain his spot in the rotation to begin 2013, as the Dodgers brought in some big guns in free agency. But he was re-inserted after ace Zack Greinke broke his collarbone in an on-field fight April 11th. In his first start, on April 16th, Chris left in the 3rd inning because of a strained left calf. He was placed on the disabled list the next day, and it was learned his injury was also sustained in the bench-clearing brawl that got Greinke. He aggravated his calf, now partially torn, when he sprinted to cover first base in his start. He was back on May 6th and made 6 starts before returning to the DL with a strained muscle. Back for a June 19th game, he beat the New York Yankees, 6-0, giving up 3 hits and no runs in 6 innings. He finished the year at 4-7, 4.26 in 24 games (20 starts) and 105 2/3 innings. He made an appearance in the postseason, the only one of his career, and it was a good one. In Game 3 of the NLDS against the Atlanta Braves, he relieved Hyun-Jin Ryu in the top of the 4th. The Dodgers were ahead, 6-4, and Capuano quieted the Braves, allowing no hits and no runs over the next three innings. When he left, the score was now 10-4, L.A., earning him the win.

Chris joined the Boston Red Sox as spring training was getting under way in 2014, filling a role earmarked for Ryan Dempster, who ultimately retired. He was used solely as a reliever, logging 31 2/3 innings in 28 appearances with a 1-1 record and an ERA of 4.55. With the Sox headed nowhere, he was released on July 1st and signed with the Colorado Rockies. After 4 solid starts between the AA Tulsa Drillers and AAA Colorado Springs SkySox, during which he went a combined 1-0, 2.79, he was purchased by the New York Yankees on July 24th. He was impressive in his Yankee debut on July 26th, giving up only two runs to the Toronto Blue Jays in 6 innings, although he ended up with a no-decision in a 6-4 loss. He went 2-3, 4.25 in 12 starts for New York, pitching 65 2/3 innings The Yankees were impressed enough to re-sign him for 2015 and he was penciled in as the fifth starter. He left an exhibition contest on March 11th early, victim of a strained quadriceps on a fielding play. He came back in May for 22 games (4 starts) and was not good, going 0-4 with a 7.97 ERA. Returning to the Brew Crew in 2016, he made 16 relief appearances with a 4.12 ERA before an elbow injury wrapped his career.

In 2019, Capuano was hired by the MLBPA as Director of Operations, after completing his master's degree in business administration from the Massachusetts Institute of Technology. He had obtained a bachelor's degree in economics from Duke University before his playing career, and had been a player representative, taking part in the CBA negotiations in 2011 and 2016.