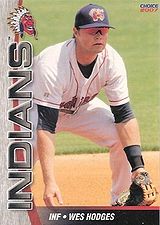 Wes Hodges made his minor league debut in 2007 and performed well.

Hodges was an All-State pick in high school in 2002 and 2003. He hit .374 as a junior and .430 as a senior despite a broken bone in his hand forcing him to bat left-handed for the first time. He was the MVP of the Tennessee-Georgia All-Star Baseball Game. The Chicago White Sox picked him in the 13th round of the 2003 amateur draft but he opted for college instead.

Hodges hit .288/.367/.473 in his pro debut, with the 2007 Kinston Indians. He hit 15 home runs and fielded .922 at third base. He was 9th in the Carolina League in average and made the league All-Star team at third. Baseball America rated him the best defensive third baseman in the league and the #5 prospect overall, between Max Ramirez and Chorye Spoone.