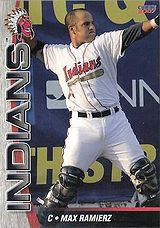 Max Ramirez was traded twice for a major league veteran before he made it to AA.

Ramirez was signed by scout Rolando Petit for the Atlanta Braves in October of 2002 as an undrafted free agent. In 2003, he hit .305/~.403/.492 for the DSL Braves II. He drove in 43, 3 behind leader Raul Dominguez, and made the Dominican Summer League All-Star team at third base.

In 2005, Ramirez batted .347/.424/.527 for the Danville Braves with 45 runs and 47 RBI in 63 games. He moved to catcher that year and tied Josh Flores for the Appalachian League in hits (83). Ramirez was leading in average almost all season, but finished second to Rene Aqueron, who finally reached the required number of plate appearances late in the season. Ramirez finished third in RBI, doubles (19), OBP and total bases (126) and was 4th in slugging and walks (31). He was named to the Appy League All-Star team at catcher and split Player of the Year honors with teammate Eric Campbell. Baseball America rated him the #5 prospect in the Appalachian League.

Max began 2007 with the Kinston Indians and continued to do a good job offensively, contributing a .303/.418/.505 clip in 77 games. He was in the top five in the Carolina League in average, trailing Jason Delaney and Flores and close to several others. He was second to only Delaney in OBP and fourth in slugging. He was third with 62 RBI and tied Kala Kaaihue for the lead in walks (53). He played in the 2007 Futures Game, batting 5th as the World team DH behind Wladimir Balentien and Joey Votto. Ramirez was 1 for 3 with a run, RBI and a double in the World team's win. He was traded in late July to the Texas Rangers for Kenny Lofton. Max hit .307/.420/.500 in 32 games for the Bakersfield Blaze following the trade. Had he qualified, he would have ranked third in the Carolina League in average behind Billy Hart and Mitch Einertson. He still made the league All-Star team as the top catcher. Baseball America rated him the #4 prospect in the league after Jordan Schafer, Chris Marrero and Elvis Andrus and right ahead of teammate Wes Hodges. They also rated him as having the best strike-zone judgment in the circuit.

Ramirez began 2008 even hotter, hitting .363/.457/.662 in 67 games for the Frisco RoughRiders. He was leading the Texas League in average, OBP, slugging and home runs (17, tied) when the Rangers called him up to the majors to replace Gerald Laird, who had gone on the DL. In his MLB debut, he hit 6th and played first base. He struck out against John Lannan in his first at-bat in The Show. He played for the Venezuelan national team in the 2009 World Baseball Classic.