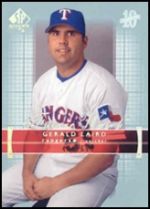 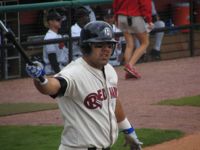 Gerald Laird was the lightest hitter for Team USA's junior squad in 1997, hitting .289.

His brother, Brandon Laird, was selected by the New York Yankees in the 27th round of the 2007 amateur draft and reached the majors in 2011. On December 30, 2009, Brandon and Gerald Laird were arrested during a fight at US Airways Arena during a Phoenix Suns-Boston Celtics game; Gerald was charged with assault.

Gerald Laird was the back-up to Yadier Molina for the St. Louis Cardinals in 2011. While he only played in 37 games in the regular season and got less than 100 at bats, he played in all three rounds of the postseason and earned a World Series ring. After the season, he returned for a second stint with the Detroit Tigers in 2012, to serve as Alex Avila's back-up. After one season there, he moved to the Atlanta Braves in 2013, backing up Brian McCann and getting to play in the postseason for the third straight season.

Laird became a manager with the Connecticut Tigers in 2017.