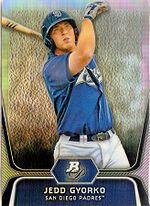 Jedd Gyorko was a second-round pick in the 2010 amateur draft.

Gyorko was all-state three times in high school, hitting 40 home runs and 231 RBI. Despite being under six feet tall, he also was all-state in basketball once. As a freshman in 2008, he hit .409/.450/.612 with 62 runs and 63 RBI in 56 games. An infielder, he fielded .965. He was named the Big East Conference Rookie of the Year and named a Louisville Slugger and Rivals.com Freshman All-American. He was third in the Big East in average.

In the summer of 2009, Jedd hit .323/.390/.488 for the Brewster Whitecaps of the prestigious Cape Cod League. He finished third in both average and slugging and was named the All-League third baseman.

The San Diego Padres took Gyorko 59th overall of the 2010 amateur draft, early in round two. Assigned to the Eugene Emeralds, he was 0 for 4 in his pro debut but went 9 for his next 16 with three doubles and two home runs.

Gyorko made the Padres' opening day roster as the starting second baseman in 2013. He started against the New York Mets on April 1st and went 1 for 4 with a double off Jon Niese for his first big league hit. He kept the job the entire season, hitting only .249 with a .301 OBP in 125 games, but with good power: his 26 doubles and 23 homers gave him a slugging percentage of .444, good for an OPS+ of 113. In August, he set a Padres rookie record with 8 homers during the month. He also did pretty well with the glove, as his fielding percentage of .992 was second among National League second basemen. He was named to the 2013 Topps All-Star Rookie Team after the season. Early in 2014, the Padres joined the prevailing trend of locking up promising young players ahead of their arbitration years by signing Jedd to a six-year contract for $35 million on April 14th. On May 9th, he had a great game against one of the toughest pitchers in baseball when he victimized Jose Fernandez of the Miami Marlins when he hit two home runs, including a grand slam, and drove in 6 runs in a 10-1 win. However, his early season did not go so well, as he was hitting only .162 with 5 homers on June 3rd when he had to go on the disabled list with plantar fasciitis. He was out until July 28th. He ended up that disappointing season with a .210 average in 111 games, 10 homers and 51 RBIs. In 2015, he bounced back to some extent, hitting .247 with 16 homers and 57 RBIs. His OBP remained poor, however, at .247, and he did not hit enough extra-base hits to compensate, making him a below-average ofensive player with an OPS+ of 94.

Gyorko's time with the Padres ended long before his contract extension ended: San Diego traded him, along with cash, to the St. Louis Cardinals on December 8, 2015 in return for outfielder Jon Jay. Out of nowhere, he had an excellent season for the Cardinals in 2016, displaying more power than ever before by banging 30 homers in 128 games. He set a new record, alongside Curtis Granderson of the New York Mets for fewest RBIs in a season of 30 or more home runs; both Granderson and Gyorko had 59 RBIs, while the previous low was 64.