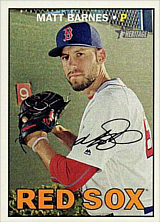 Matt Barnes was a first-round pick in the 2011 amateur draft. He won a World Series ring in 2018.

Barnes was All-State as a senior in high school. As a college freshman at the UCONN, he was 5-3 with a save, a 5.43 ERA and 55 strikeouts in 53 innings. That summer, he had a 1-3, 4.78 record for the Wareham Gatemen of the Cape Cod League, striking out 33 in 26 1/3 innings. As a sophomore in 2010, he improved to 8-3, 3.92. He was All-Big East Conference, joining Corey Baker, Neil Holland and Thomas Royse as the pitchers chosen. He started the summer back in Cape Cod, going 1-2 with a 2.18 ERA, 12 hits and 20 strikeouts in 20 2/3 innings for Wareham. Baseball America rated him the 3rd best prospect in that elite loop, behind Anthony Ranaudo and Huskies teammate George Springer, just ahead of Wareham teammate Jed Bradley. He then joined Team USA, going 3-0 with a 1.42 ERA. He was excellent in his lone outing in their big event, the 2010 World University Championship, with 3 hits, 1 walk and 8 whiffs in 7 shutout innings against Canada. The United States won the Silver Medal.

Barnes continued to blossom as a junior, with a 11-5, 1.93 record, .187 opponent average and 117 strikeouts in 121 innings. He was named the Big East Pitcher of the Year and picked by the Boston Red Sox 19th overall in the 2011 amateur draft, the second-highest UCONN pick ever after Springer, 8 choices prior by the Houston Astros (both men usurping Mike Olt, 49th overall in 2010). The choice was compensation for the loss of Víctor Martínez to free agency. In his next outing, in the Super Regionals of the College World Series, Matt was shredded for 8 hits and 5 runs in 4 1/3 innings in a loss to the University of South Carolina to raise his ERA from 1.62 to his final 1.93. He finished second in Huskies history in strikeouts. He signed with the Sox for a $1.5 million bonus; the scout was Ray Fagnant.

Barnes made his pro debut with the Greenville Drive with a stellar showing against the Lakewood BlueClaws on April 8, 2012. He allowed two hits and two walks in five shutout innings while fanning nine for the win. He reached the majors with the Red Sox when rosters expanded in September 2014 and pitched 5 times with no decisions and an ERA of 4.00. In 2015, he split his time between the minors and the majors. With Boston, he pitched 32 times, with two of the outings being starts, and went 3-4, 5.44 while logging 43 innings. Things went a lot better in 2016 as he settled in as one of the set-up men for new closer Craig Kimbrel while the team found itself among the three teams fighting for the AL East crown. On August 9, he earned his first career save under stressful circumstances, as Kimbrel had just loaded the bases against the New York Yankees in the 9th inning and walked in a run to cut Boston's lead to 5-3. Barnes took over and struck out Mark Teixeira to end the game and preserve Rick Porcello's 15th victory of the year.

On April 24, 2017, he was handed a four-game suspension for having thrown a ball at Manny Machado's head a day earlier. The incident came at the end of a tense series between the Red Sox and Baltimore Orioles, with the Sox blaming Machado for a violent [[slide]¸that injured second baseman Dustin Pedroia. Since 2017, he has been a workhorse in the Boston pen, averaging 67 appearances, 65 innings pitched with an ERA around 3.75. He was a member of the Red Sox 2018 world championship team. Barnes boasts a mid-90s fastball in his arsenal.